UNICEF/Souleiman
Three girls, one of them a ten-year-old, walk along a debris-strewn street in Al-Tabqa city, Syria. Along with her family, the ten-year-old recently returned to their home after being uprooted several times. May 2017.
30 June 2017

Citing “significant” returns of displaced persons to and within Syria, the United Nations refugee agency said today that while it will be scaling up its response to assist those coming back, it can neither promote nor facilitate returns given the security and humanitarian situation in the war-torn country.

According to estimates, more than 440,000 internally displaced people have returned to their homes during the first six months of this year. During the same period, the Office of the UN High Commissioner for Refugees (UNHCR) has recorded over 31,000 Syrian refugees returning from neighbouring countries.

Seeking out family members, checking on property, and, in some cases, a real or perceived improvement in security conditions in parts of the country were the primary factors influencing those who decided to return, Andrej Mahecic, a spokesperson for the UN agency, told reporters in Geneva.

“While there is overall increased hope linked to the recent Astana and Geneva peace talks, [we] believe conditions for refugees to return in safety and dignity are not yet in place in Syria,” he said, voicing concern over the sustainability of security improvements as well as significant protection risks in many return areas.

“At this stage, and while UNHCR will be investing to help, with other partners, to improve conditions in accessible areas inside Syria, refugee returns from host countries can neither be promoted nor facilitated by UNHCR at this stage,” he added.

In particular, access to displaced populations inside Syria remains a key challenge, noted Mr. Mahecic, highlighting that aid convoys are still unable to access regularly those areas that have become newly accessible.

Other challenges include limited livelihood opportunities, shortages of food and water, and sporadic or non-existent health, education, social and other basic services. Many of Syria’s schools have been damaged or destroyed and offer no possibility for education.

In the midst of this complex situation, UNHCR is pursuing a number of preparatory steps, in anticipation of the time when conditions for voluntary repatriation of refugees in conditions of safety and dignity are in place. However, resources remain a major constraint, hindering its efforts.

Of the $304 million appeal for its operations to assist the displaced inside Syria in 2017, only $103 million (about 33 per cent) has been received by UNHCR.

It is also seeking an additional $150 million in 2017 to ramp up its delivery inside Syria to support both the displaced, returnees and other vulnerable people, and to help improve conditions in potential return areas.

The Syrian conflict, now into its seventh year, has claimed the lives of hundreds of thousands, displaced some 6.3 million within the country and forced 5.1 million to flee outside its borders. Also, more than 13.5 million Syrians are in need of humanitarian assistance, including nearly 4.5 million in besieged and hard-to-reach areas. 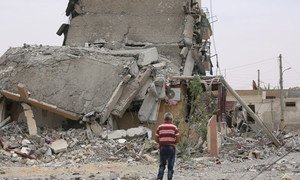 Civilians must not be sacrificed for military victories – UN rights chief, as thousands trapped in Raqqa

Voicing grave concern over the fate of as many as 100,000 civilians “effectively trapped” in Syria's Raqqa governorate amid the ongoing offensive against Islamic State in Iraq and the Levant fighters, the top United Nations rights official urged all parties to the conflict to enact measures to allow civilians who wish to flee the fighting to do so in safety.