Briefing the Security Council today, the United Nations political chief called on the participants of the plan of action on Iran’s nuclear programme as well as the wider international community to continue to support the full and effective implementation of the agreement.

“The Secretary-General believes that the comprehensive and sustained implementation of the Joint Comprehensive Plan of Action (JCPOA) will guarantee that Iran’s nuclear programme remains exclusively peaceful, while allowing for transparency, monitoring and verification,” said Jeffery Feltman, the Under-Secretary-General for Political Affairs.

“It will also provide Iran with an opportunity for greater engagement with the international community and assist in increasing its trade and economic relations [as well as] bring forth to a satisfactory conclusion the consideration of the Iranian nuclear issue by the Council,” he added in his briefing on resolution 2231, in which the Council endorsed the plan of action.

Mr. Feltman told the 15-member body that the Secretary-General had not received any report, nor is he aware of any open source information regarding the supply, sale or transfer to Iran of nuclear-related items undertaken contrary to the provisions of the resolution.

He also updated the Council on proposals under consideration of the procurement channels established by the resolution.

In relation to implementation of ballistic missile-related provisions, Mr. Feltman noted that on 29 January this year, Iran launched a medium-range ballistic missile following which letters were submitted to the Secretary-General by Iran and Israel, as well as jointly by France, Germany, the UK and the US concerning the launch.

“As in the case of the ballistic missile launches by Iran in March 2016, there was no consensus in the Security Council on how this particular launch related to resolution 2231 (2015),” said Mr. Feltman. Quoting from the third report of the Secretary-General on the resolution, he added that the Secretary-General called on Iran to avoid such ballistic missile launches “that have the potential to increase tensions.”

The Secretary-General also appealed to all UN Member States to redouble their efforts to promote peace and stability in the region, noted Mr. Feltman.

Additionally, in relation to arms-related transfers, the Under-Secretary-General told the Security Council that the current report of the Secretary-General included additional information on the seizure of an arms shipment by the French Navy in the northern Indian Ocean in March 2016.

“After examination of the weapons and analysis of information provided, the [UN] Secretariat is confident that the weapons seized are of Iranian origin and were shipped from Iran,” he said.

In January 2017, France had invited the UN Secretariat to examine the seized arms.

Concluding his briefing, Mr. Feltman also highlighted that as the JCPOA implementation enters its third year, the Secretary-General has highlighted the particular responsibilities of the agreement’s participants towards its full and effective implementation.

“The Secretary-General is hopeful that all participants will continue to make progress in the implementation of the agreement, and in the process secure its durability,” he said.

Adopted unanimously in July 2015, resolution 2231 endorsed the JCPOA that was signed earlier that month by the five permanent members of the Council (China, France, Russia, the United Kingdom and the United States), plus Germany, the European Union (EU) and Iran.

The agreement set out a rigorous monitoring mechanism and timetable for implementation, while paving the way for the lifting of UN sanctions against Iran.

Also briefing the Council were Ambassador Sebastiano Cardi of Italy, in his capacity as the Security Council Facilitator for the implementation of resolution 2231, and Joao Vale de Almeida, Head of the Delegation of the European Union to the UN. 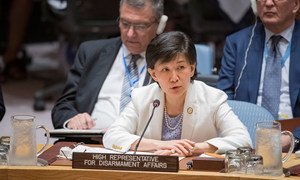 The United Nations disarmament chief today called for stronger international cooperation to prevent terrorists from accessing and using weapons of mass destruction, warning that technological advances – such as unmanned aerial vehicles, 3-D printers and the Dark Web – make it easier for terrorist groups to effectively use such weapons.