“The Secretary-General congratulates the people and Government of Côte d’Ivoire for their determination and efforts in turning the page of crisis and conflict,” said Stéphane Dujarric, Spokesman for the Secretary-General, in a statement.

After 13 years, the UN is completing the peacekeeping phase of its engagement with Côte d'Ivoire, after successfully assisting the country in restoring peace and stability following the post-2010 election crisis.

When UNOCI closes its doors on 30 June, it will mark the most recent successful completion of a peacekeeping operation in West Africa since the UN mission in Sierra Leone in 2005.

This milestone was made possible thanks to a significantly improved security situation in Côte d’Ivoire, as well as the extension of State authority and the deployment of public services, the strengthening of democratic institutions, progress in security sector reform and steady economic development.

The Secretary-General reiterated the commitment of the rest of the UN family present in Côte d’Ivoire to support the Government with the implementation of outstanding reform activities with a view to ensuring that “the hard-won peace can be sustained and the country and its people will continue to progress and thrive,” the spokesperson added.

Mr. Guterres also commended the significant contributions of all partners national, regional and international in the Ivorian peace process, and is appreciative of the excellent leadership of his Special Representative, Aïchatou Mindaoudou, and her predecessors.

Paying tribute to all uniformed and civilian personnel who served with UNOCI, the Secretary-General expressed his profound respect for the memory of the 150 peacekeepers who lost their lives in the service of peace with the Mission, and his gratitude to all troop- and police- contributing countries.

UN Special Representative Aïchatou Mindaoudou and local residents highlight the vital contributions UNOCI made in restoring peace and security in the nation. 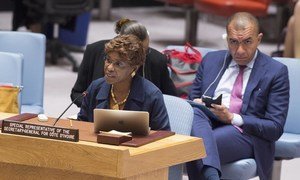 Briefing the Security Council for the final time as the United Nations mission in Côte d'Ivoire draws down, the UN envoy for the country thanked the Government for its support and said that though more needs to be done, but the West African nation has shown its resolve for a peaceful, stable and prosperous future.