IOM/Muse Mohammed
A family looks out the window and take pictures as they undertake their journey for resettling.
28 June 2017

Speaking at a major international meeting on migration and development, senior United Nations officials have underlined the need for safe, orderly and regular migration options to ensure that people around the world are not forced to undertake arduous and dangerous pathways in their search for a better future.

Such efforts would also address a number of security, development and human rights concerns regarding migration, said Louise Arbour, the Special Representative of the Secretary-General for International Migration, in her keynote address to the plenary of the Global Forum on Migration and Development, currently underway in the German capital, Berlin.

“Failure, on the other hand, would leave us unequipped to harvest the immense potential of migration,” she said.

“Worse still, the negative impact of irregular migration – both human and societal – would develop roots which would become ever harder to eradicate.”

In her address, Ms. Arbour also emphasized that effective international cooperation and political leadership were vital for the success of a global compact for safe, orderly and regular migration and called on all participants for strong leadership as well as the “willingness to compromise.”

She also highlighted that the UN Charter, the international human rights framework and the 2030 Agenda for Sustainable Development already offered a framework for the global compact and urged everyone to “resist the temptation to reinvent the wheel.”

Also speaking today, William Lacy Swing, the Director-General of the UN International Organization for Migration (IOM), noted that it is a fact that migration will continue and called for safe and legal pathways to prevent migrants from being abused or risking their lives in perilous journeys. 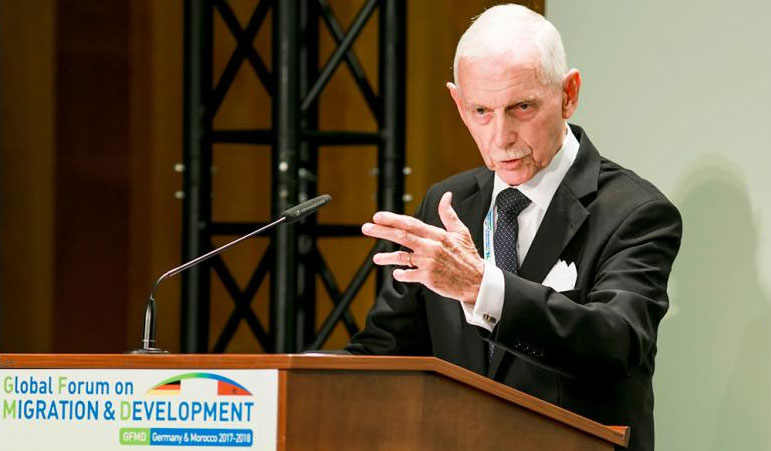 William Lacy Swing, the Director-General of the UN International Organization for Migration (IOM), addresses the Global Forum on Migration and Development in Berlin, German. Photo: IOM

In that context, he underlined that efforts to assist them should be centred on their rights, needs and capacities.

“We need to address the relationship of migration to critical adjoining policy domains, including development, humanitarian, climate change, and peace and security, in a truly comprehensive way,” he said, urging the international community to move away from “reactive, unidimensional approaches” to migration governance.

“I believe we all agree that we dare not miss this ‘rendezvous with history,’ as this opportunity may not present itself again,” he added.

In the same vein, Guy Ryder, the Director-General of the UN International Labour Organization (ILO), stressed the importance of taking action that made “a real difference” in the lives of migrants arriving on foreign soil, with hopes for a better future.

“If we are to foster the benefits of these movements for all concerned, our policy choices matter greatly,” he said, while citing the need to remove what he called “the toxicity” from the public debate.

He also emphasized the contributions made by migrants and called for better recognition of their skills and experience to allow them to attain their full potential.

Participants at the Global Forum on Migration and Development taking place in Berlin, Germany. Photo: IOM

Also speaking at the Global Forum, Filippo Grandi, the UN High Commissioner for Refugees, called for action to ensure better protection of migrants and refugees as well as their rights.In particular, he urged all stakeholders for expanding legal pathways that benefit both these vulnerable groups.

The Global Forum on Migration and Development was set up by the UN in 2007 as an informal, non-binding, voluntary and government-led venue for high-level discussions on policies, challenges and opportunities presented by the “migration-development nexus.”

Outcomes of the tenth session will feed into the ongoing process of forging a global compact for safe, orderly and regular migration, a framework for effective migration governance. The current session also marks the culmination of more than a decade of international dialogue and cooperation on migration and development. 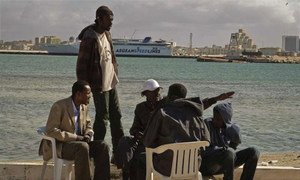 A dramatic up tic in the amount of money migrants send home to their families in developing countries is helping to lift millions out of poverty, according to a new report out today from the United Nations International Fund for Agricultural Development (IFAD).