To mark the International Day Against Drug Abuse and Illicit Trafficking, the United Nations is calling on all countries to honour their commitments to address the scourge and to ensure that steps to do so are consistent with human rights and promote equality, peace, security and sustainable development.

“Despite the risks and challenges inherent in tackling this global problem, I hope and believe we are on the right path, and that together we can implement a coordinated, balanced and comprehensive approach that leads to sustainable solutions,” said UN Secretary-General António Guterres .

In his message on the International Day, the UN chief also recalled the special session on the World Drug Problem, convened by the UN General Assembly, where Governments agreed upon a series of steps which are more effective and humane, and leaves no one behind.

“I know from personal experience how an approach based on prevention and treatment can yield positive results,” noted Mr. Guterres, referring to steps he took as the Prime Minister of Portugal, including introduction of non-criminal responses to the possession of drugs for personal use – a flexibility afforded by the three international drug control conventions – and greater resources for prevention, treatment, and social reintegration programmes.

The steps helped the country achieve one of the lowest death rates for drug use in Europe, as well reduce the prevalence of HIV amongst injecting drug users.

“I am proud of these results and hope this experience will contribute to the discussion and encourage [UN] Member States to continue exploring comprehensive and evidence-based solutions,” added the Secretary General, noting that the follow-up process to the 2016 special session includes an institutional framework to share best practices.

“This would be the best possible way to implement the UNGASS recommendations and to have a positive impact on the lives of millions of people around the world,” he said.

Similarly, in his own message on the Day, Yury Fedotov, the Executive Director of the UN Office on Drugs and Crime (UNODC), also recalled the commitments expressed at last year's General Assembly special session and underscored the challenges that drug abuse and illicit trafficking pose to sustainable development.

“Once viewed as a marginal actor on the development stage, drugs and crime are now viewed as a disturbing obstruction to the achievement of the 2030 Agenda for Sustainable Development, particularly [Sustainable Development] Goal 3 on health and Goal 16 on peaceful societies,” he said, underscoring the importance of implementing the commitments made by UN Member States last year.

The theme for the 2017 edition of the Day, Listen First – Listening to children and youth is the first step to help them grow healthy and safe, builds on the theme for the commemoration last year, as an initiative to increase support for prevention of drug use that is based on science and is thus an effective investment in the well-being of children and youth, their families and their communities. 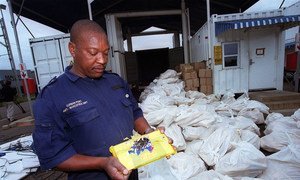