In Haiti, Security Council spotlights opportunities for country's reform towards stability and development

Wrapping up a three-day visit to Haiti, a Security Council delegation today stressed that it has accomplished the objectives of the mission, including a first-hand look into how best the United Nations could contribute to the country's lasting stability and development.

“I am glad to report that the objectives of the visit were met,” Sacha Sergio Llorentty Soliz, Bolivia's Permanent Representative to the UN, who led the Council delegation, told a press conference in Port-au-Prince, Haiti.

“With this visit, we have reaffirmed the Security Council's commitment towards the government and the people of Haiti and towards its institutional strengthening in order to contribute to its stability and development,” he added.

Bolivia holds the Council's presidency for the month of June.

In resolution 2350 of 13 April, the 15-member Council extended the mandate of the UN Stabilization Mission in Haiti (MINUSTAH) for a final six months, deciding to replace it with a smaller follow-up peacekeeping mission that would help the Government of Haiti strengthen rule-of-law institutions, further develop and support the Haitian National Police and engage in human rights monitoring, reporting and analysis.

“Haiti has fortunately entered a new period of stability, providing an important window of opportunity for the government and other state institutions to be able to bring forward a programme of reform so needed to allow Haiti to join the path of sustainable development,” Mr. Llorentty said.

The delegation also sought to review how to implement MINUSTAH's transition to the UN Mission for Justice Support in Haiti (MINUJUSTH), and identify the necessary requirements for the successful implementation of the follow-up mission's mandate.

During the visit, the Council delegation met with President Jovenel Moïse, member of his Cabinet, parliamentarians, national police, judicial officials, and civil society and private-sector representatives.

“The encounters with these interlocutors allow us to come to better understanding of the challenges the government and people in Haiti face in this new political context,” Mr. Llorentty said.

He said the Council believes the new mission to be part of the strategy to ensure Haiti's progressive transition to development.

The implementation of the new mission is a demonstration of the UN's long-term commitment to Haiti, he said, stressing that a stronger level of national ownership and leadership from the Government is also expected.

On cholera, the Security Council delegation reaffirmed its support for the new efforts undertaken by the UN.

“We are reminded that peace and security are intrinsically intertwined with the basic needs of the population. If the basic needs, such as health, education, water and sanitation services are not met, the road to lasting stability and development will be difficult if not impossible to achieve,” Mr. Llorentty said.

Last December, then-Secretary-General Ban Ki-moon put forward a New Approach to Cholera in Haiti to demonstrate the Organization's commitment to the elimination of the disease. He also apologized to the Haitian people on behalf of the United Nations stating that the Organization simply had not done enough with regard to the 2010 cholera outbreak and its subsequent spread in Haiti.

Earlier this week, Ban's successor António Guterres appointed Josette Sheeran of the United States as the Secretary-General's Special Envoy for Haiti. She will guide full implementation of the Organization's new approach.

The new approach on cholera involves two tracks: the first to intensify efforts to reduce and ultimately end the transmission of the disease, improve access to care and treatment, and address the longer-term issues of water, sanitation and health systems. Track 2 involves developing a package of material assistance and support for those Haitians most directly affected by cholera. 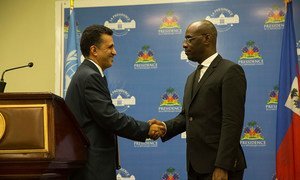 In visit to Haiti, Security Council delegation to reaffirm support for country's stability and development

The United Nations Security Council on Thursday began a three-day visit to Haiti to reaffirm its support for the Haitian Government and people in strengthening institutions to contribute to the country's stability and development.