Nitrogen and metals, like lead and mercury, can strain farmable land by polluting soil, and damaging plants, and ultimately, posing risks to food security, according to the United Nations agriculture agency.

“Soil pollution is an emerging problem, but, because it comes in so many forms, the only way we can reduce knowledge gaps and promote sustainable soil management is to intensify global collaboration and build reliable scientific evidence,” said Ronald Vargas, FAO soils officer and Secretary of the GSP.

“The GSP Plenary Assembly is a unique, neutral and multi-stakeholder platform to discuss global soil issues, to learn from good practices, and to deliberate on actions to secure healthy soils for an effective provision of ecosystem services and food for all,” said Maria Helena Semedo, FAO Deputy Director-General, Climate and Natural Resources. “Action at the country level is the new frontier.”

The Plenary Assembly endorsed three new initiatives aimed at facilitating information exchange: the Global Soil Information System; the Global Network of Soil Laboratories, set up to coordinate and standardize measurement across countries; and the International Network of Black Soils, launched to increase knowledge about the world's most fertile agricultural soils, which are also known for their high carbon content.

The term soil pollution refers to the presence in soils of chemicals that are either out of place or at higher-than-normal concentrations. It is an insidious risk because it is harder to observe than some other soil degradation processes, such as erosion.

Agricultural inputs such as fertilizers, herbicides and pesticides – and antibiotics contained in animal manure – are major potential pollutants, posing special challenges due to the fast-changing chemical formulas employed.

The GSP endorsed a global symposium on soil contamination and pollution, for April 2018, and supported data networks to share information and harmonize standards to ease the burden.

“Black soils” are far from uniform. The new International Network of Black Soils defines them as containing at least 25 centimetres of humus and with soil organic carbon content above two per cent; by this definition they cover about 916 million hectares, or seven per cent of the world's ice-free land surface.

The Network will promote their conservation and long-term productivity by producing analytic reports and serving as a platform for knowledge sharing and technical cooperation.

♦ Receive daily updates directly in your inbox - Subscribe here to a topic.
♦ Download the UN News app for your iOS or Android devices.
agriculture and food security|pollution 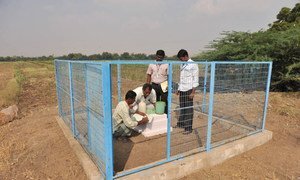