A 'Solidarity Summit' for refugees hosted by Uganda has raised some $358 million in pledges, the United Nations announced today.

A ‘Solidarity Summit’ for refugees hosted by Uganda has raised some $358 million in pledges, the United Nations announced today.

UN Secretary-General António Guterres told reporters in the Ugandan capital, Kampala, that it was a “good starting point” although the international conference was looking to raise $2 billion.

Hosted by President Yoweri Museveni and the UN Secretary-General, the Summit sought to rally international support for refugees and host communities in the form of donations, investments and relevant programmes, over the next four years.

Mr. Guterres noted that the World Bank and the African Development Bank had promised “innovative funding” for projects involving both refugees and the local communities.

“We cannot stop,” he underscored, recalling that several of the participating countries agreed to put forward their pledges in the weeks to come.

Uganda is hosting a little over 1.2 million refugees and asylum seekers, some 950,000 of them are from war-torn South Sudan, according to estimates from the Office of the UN High Commissioner for Refugees (UNHCR), also a co-chair of the international conference.

Furthermore, perhaps 2,000 people a day are crossing the border into northern Uganda’s Arua district. The majority are women and children who arrive exhausted and hungry, with little more than the clothes on their backs. Some of them even have their first meal at the Imvepi reception centre, after walking for days to reach safety, UNHCR field workers confirmed.

The mass influx has triggered a humanitarian emergency, what the Secretary-General described as the “biggest refugee exodus since the genocide in Rwanda.”

The Government of Uganda, the UN team in the east African country, including its humanitarian partners, are all struggling to respond to this emergency. The new arrivals need life-saving assistance such as water, food and health services. 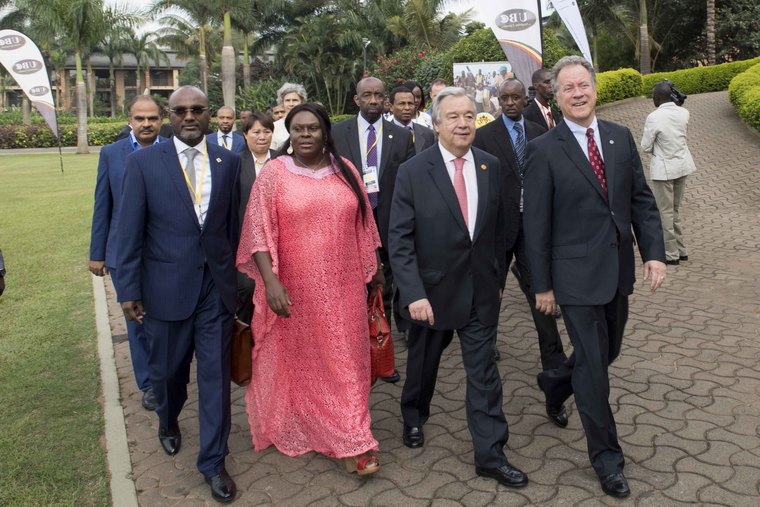 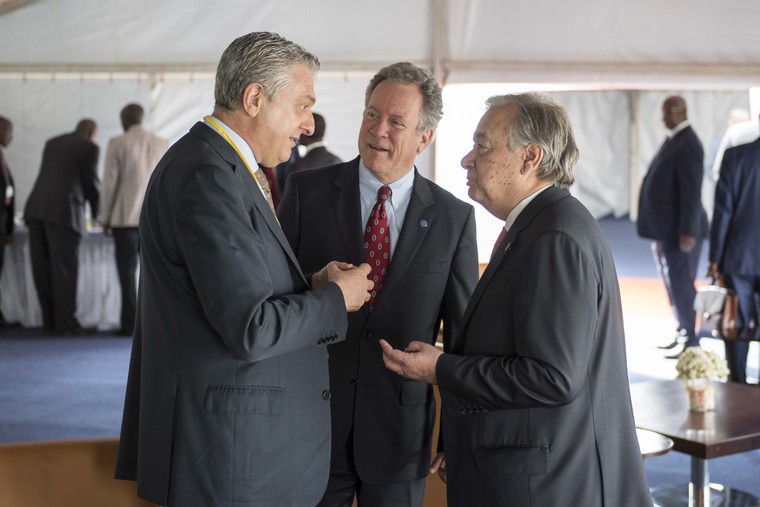 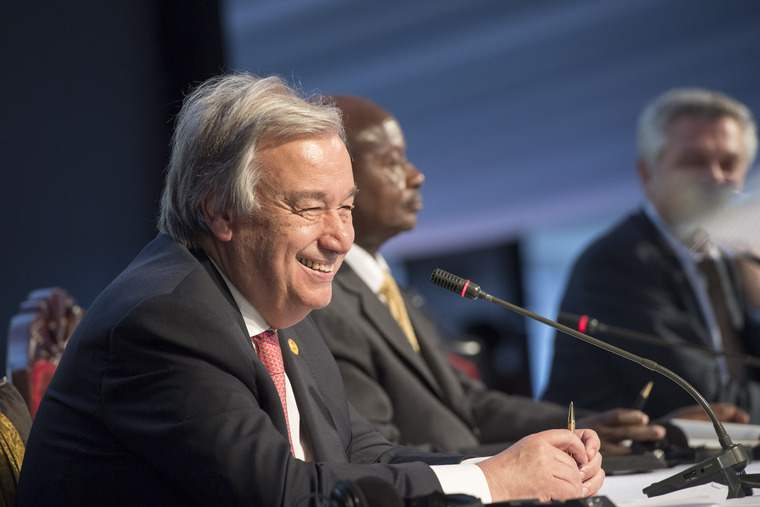 The Secretary-General holds a joint press conference with the President of Uganda and High Commissioner of Refugees on the outcome of the Uganda Solidarity Summit. UN Photo/Mark Garten 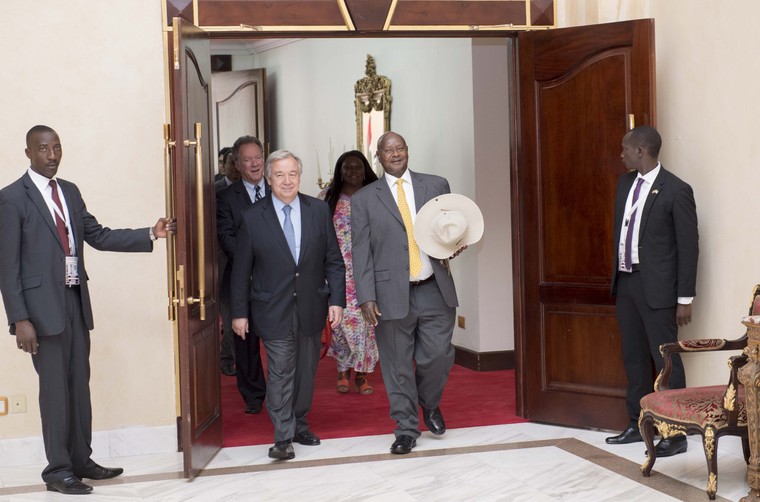 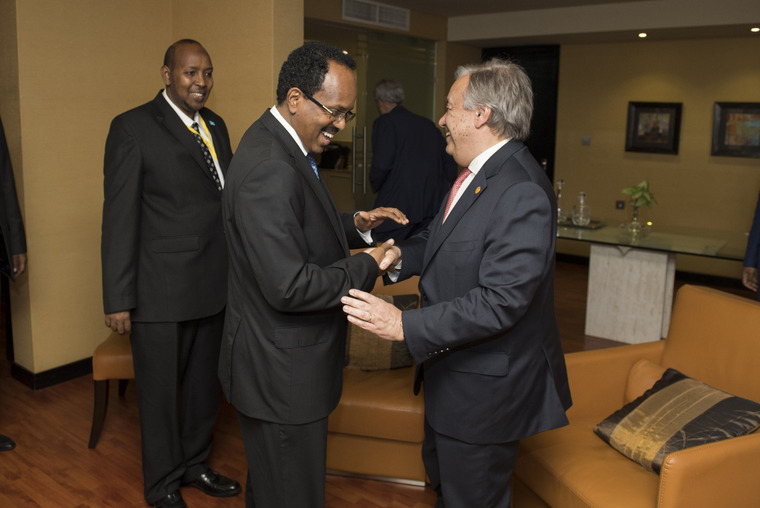 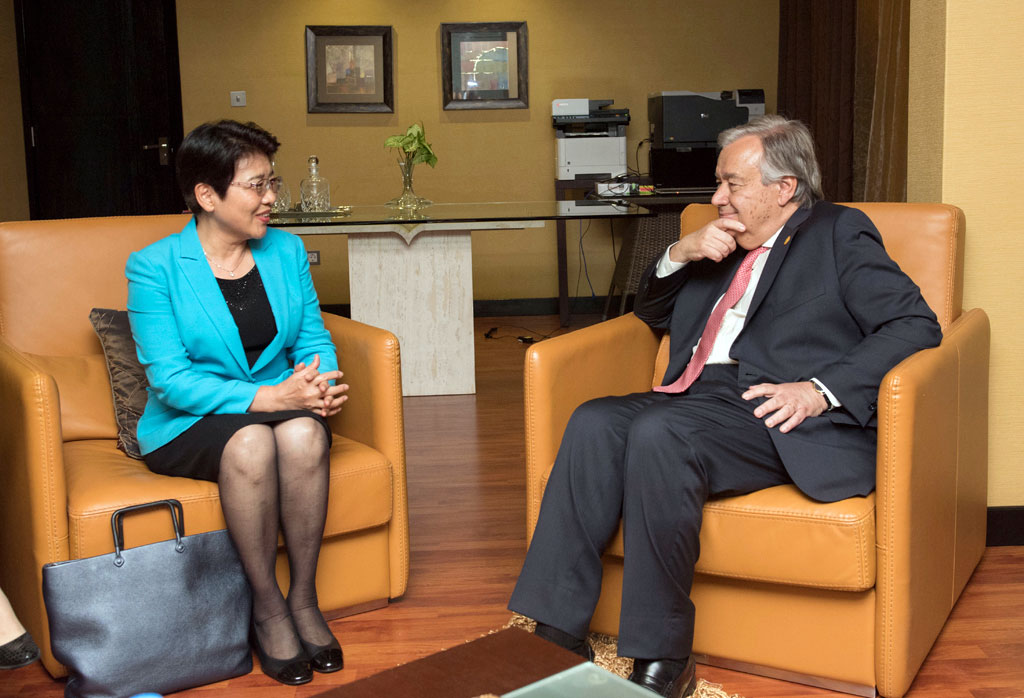 The UN chief has bi-lateral meeting with Xu Jinghu, Special Representative of the Government of the People’s Republic of China on African Affairs. Credit: UN Photo/Mark Garten

In his remarks at the opening ceremony of the Solidarity Summit, the UN High Commissioner for Refugees, Filippo Grandi, warned that close to one-third of the people in South Sudan have been uprooted from their homes by the ongoing conflict.

“It’s almost as if the country is emptying itself,” he noted, while reminding the participants that South Sudan was the “world’s newest nation.”

Meanwhile, during Thursday’s visit to the Imvepi refugee settlement, David Beasley, head of the World Food Programme (WFP), said his agency was struggling to provide three meals a day. “We need $100 million to feed these people for the remaining part of the year. We need the money and we need it now.”

Mr. Beasley accompanied Mr. Grandi and Mr. Guterres to the settlement to hear about the challenges facing the refugees from South Sudan, as well as the host communities.

Uganda, through its Refugee Act of 2006, has a generous and progressive refugee policy which does not confine refugees and asylum seekers to camps and allows them to travel freely, own land, open businesses and go to school.

Earlier in the day, the UN chief said it was necessary to recognize that Uganda remained “a symbol of the integrity of the refugee protection regime” that unfortunately is not respected everywhere in the world, he stressed.

“Not all doors are open and not all refugees are accepted, and sometimes in countries richer than Uganda,” he said.

Twelve years ago, Mr. Guterres reminisced, he was celebrating with the South Sudanese who were about to return home full of hope.

Now they were back in exile and for him, the conclusion was obvious: everything must be done to end the war in South Sudan.

At the conclusion of the Summit, after all the pledges were made, the Secretary-General, responding to a question asked by a reporter, drove home that point, emphasizing: “If there is one clear message from all the refugees that we met, it is that this conflict must stop. It is politically and morally unacceptable.”

With Uganda hosting almost one million South Sudanese refugees “as sisters and brothers and sharing with them their land and everything they have,” United Nations Secretary-General António Guterres today urged the international community to show solidarity with those that had fled their homes, as well as with the Ugandan Government and people.