Extremely high May and June temperatures have broken records in parts of Europe, the Middle East, North Africa and the United States, the United Nations weather agency reported today, warning of more heatwaves to come.

The heatwaves have arrived unusually early, the World Meteorological Organization (WMO) said, noting at the same time that average global surface temperatures over land and sea are the second highest on record for the first five months of 2017, according to analyses by the US National Oceanic and Atmospheric Administration (NOAA).

In Portugal, extremely high temperatures of around 40 degrees Celsius contributed to the severity of the devastating, fast-moving weekend wildfires that ripped through the country's forested Pedrógão Grande region, some 150 kilometres (95 miles) north-east of Lisbon, leaving dozens dead and more injured.

WMO reported that Portugal is not the only European country experiencing the effects of the extreme weather, as neighbouring Spain – which had its warmest spring in over 50 years – and France, have seen record-breaking temperatures. France is expected to continue see afternoon temperatures more than 10 degrees above the average for this time of year.

VIDEO: UN World Meteorological Organization expresses concerns over climate change and long-term warming, noting high temperatures recorded across parts of Europe, the Middle East and the US in the past two months.

Plane traffic halted in southwestern US

On the other side of the Atlantic, the US is also experiencing record or near-record heat. In parts of the desert southwest and into California, temperatures have hovered near a blistering 120 degrees Fahrenheit (49 degrees Celsius). Media reports suggested today that some plane traffic was halted in and out of Phoenix Sky Harbour International Airport in Arizona because it was too hot to fly.

The flight cancellations came amidst of one of the hottest days in the past 30 years of record keeping in the US state.

Death Valley National Park in California issued warnings to visitors to expect high temperatures ranging from 100 to over 120 degrees Fahrenheit (38 to over 49 degrees Celsius), WMO added.

WMO will set up an international committee of experts to verify the temperature and assess whether it equals a reported 54 degrees Celsius recorded in Kuwait last July, what was then the highest temperature for Asia, as well as for the entire Eastern hemisphere. 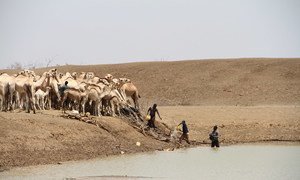 Investing in preparedness and building the resilience of farmers is fundamental to cope with extreme drought, because responding to such situations when they hit might be too late, the head of the United Nations agricultural agency said today.