UN Photo/Loey Felipe
María Soledad Cisternas Reyes, Chairperson of the UN Committee on the Rights of Persons with Disabilities (CRPD), was appointed the Secretary-General’s chief's Special Envoy on Disability and Accessibility.
20 June 2017

United Nations Secretary-General António Guterres today announced the appointment of senior officials as his envoys, respectively, for promoting universal accessibility, and on the rights of young people.

The senior appointments include María Soledad Cisternas Reyes of Chile has been appointed the UN chief's Special Envoy on Disability and Accessibility, a role in which she will promote the rights of persons with disabilities, with a particular emphasis on accessibility for all.

Ms. Cisternas most recently served as the President of the UN Committee on the Rights of Persons with Disabilities. She is also the recipient of the National Prize of Human Rights (2014) and Director of the Legal Programme on Disability, Faculty of Law, Diego Portales University.

She previously served as an expert on the Ad-hoc Committee that developed the UN Convention on the Rights of Persons with Disabilities (CRPD), for which she was also the Rapporteur for individual complaints. She has also authored various publications.

Also today, the UN chief appointed 26-year-old Jayathma Wickramanayake of Sri Lanka – who played a key role in transforming the youth development sector at the national level – as his Envoy on Youth.

Ms. Wickramanayake is also credited with having established the 'Hashtag Generation,' a large civic and political engagement movement of young people. She has also represented and motivated global youth development at the international level since the age of 21, including at the UN, such as in the declaration of World Youth Skills Day.

Presently working as an officer of the Sri Lanka Administrative Service, Ms. Wickramanayake previously served as Secretary to the Secretary General of the Parliament of Sri Lanka (2016-2017) as well as a Senator at the Sri Lankan Youth Parliament (2013-2015).

In the statements, Mr. Guterres expressed that he was grateful to the outgoing senior leaders. 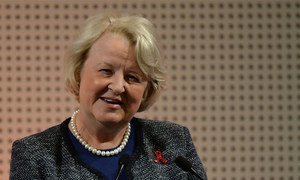