Mali: UN condemns terrorist attack at hotel on the outskirts of Bamako

United Nations Secretary-General António Guterres has condemned the terrorist attack carried out at a hotel on the outskirts of Bamako on 18 June and offered his full support to the Government of Mali to bring the perpetrators to justice.

In a statement issued today by his Spokesman Stéphane Dujarric, the UN chief expressed his condolences to the bereaved and the families of the victims, as well as to the people and Government of Mali. He also wished a speedy recovery to those injured.

According to statement, the Secretary-General has offered his full support to the Government in its efforts to bring the perpetrators of these crimes to justice.

“This act strengthens the United Nations' determination to support the people of Mali, the Government and the signatory armed groups in their efforts to uphold the peace agreement, to counter terrorism and violent extremism and their quest for lasting peace and stability,” the statement concluded.

News reports suggest that at least five people were killed in the attack against Le Campement Kangaba, a popular resort east of the Malian capital Bamako.

Yesterday, MINUSMA also strongly condemned the revolting terrorist attack and expressed its deepest condolences to the Governments and families of the victims and wished a speedy recovery to the wounded.

The Mission reported that all United Nations personnel are safe, though four MINUSMA personnel were slightly injured and evacuated on the evening of the attack.

“MINUSMA congratulates the Malian security forces for their diligent efforts and underlines the importance of full cooperation with the relevant Malian authorities to ensure that those responsible for this heinous crime are identified and brought to justice,” said the mission. 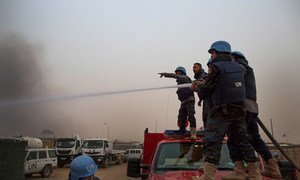