The situation in the Central African Republic is “unsustainable,” an independent United Nations expert today warned, urging the Government to stop the spread of armed groups and increasing human rights violations.

“This situation is unsustainable and the country must regain the integrity and sovereignty of its territory without further delay, to ensure security and the rule of law,” said the independent expert on human rights in the country, Marie-Thérèse Keita Bocoum.

Armed groups are spreading at a “worrying” rate in central and southern areas, particularly in the regions of Ouaka, Mbomou and Basse-Kotto, the expert added.

She noted that the violence and a lack of a Government response had sparked outrage in the population.

“The State has an obligation to protect the population,” said Ms. Keita Bocoum. “The international community, especially the UN stabilization force MINUSCA, must work alongside the State to implement this responsibility effectively.”

Recent human rights abuses in the country include killings rapes and targeting of UN peacekeepers, according to a recent mapping report of the violations.

The independent UN expert called for human rights violations to be investigated “without further delay” and invited the Minister of Justice to strengthen the resources of national courts.

The comments come one day after a reported deal between the Government and 13 of the 14 armed groups active in the country that has been ravaged by three years of conflict.

Fresh violence surfaced earlier this year. As of May 2017, there were more than 500,000 internally displaced persons nationwide, a figure that had not been reached since August 2014. 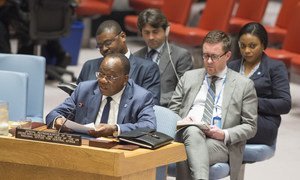 The United Nations envoy for Central Africa today expressed his concern that the withdrawal of troops from the regional force by some contributing countries would create a security vacuum that may be exploited by an armed group.