UNICEF/Oatway
South Sudanese refugees wait at a reception centre in Uganda for further processing before relocation to a settlement. More than one million children have been forced from their homes since violence erupted in South Sudan in December 2013.
20 June 2017

Raising alarm over the plight of refugees, in particular the situation of women and children, arriving in Uganda, Ethiopia and Kenya having fled violence and instability in South Sudan, the United Nations Children's Fund (UNICEF) has called on governments to do more to ensure that the most vulnerable are protected.

Since violence erupted in South Sudan in December 2013, more than 1.8 million people, including more than one million children have arrived in neighbouring countries.

Many of them have fled “horrific violence,” according to the UN agency's Regional Director for Eastern and Southern Africa, Leila Pakkala.

“Day after day, week after week, they are being received by countries such as Uganda, Ethiopia and Kenya,” she added.

In just one year the refugee population in Uganda has more than doubled from 500,000 to more over 1.25 million, making the country host to the fastest growing refugee emergency in the world.

According to estimates, nearly 86 per cent of all refugees in the country are women and children and Uganda is now the third largest refugee-hosting country in the world, after Turkey and Pakistan.

“Uganda has a progressive and generous open door policy to refugees […] providing better prospects for refugee children than in many contexts globally,” said Ms. Pakkala, expressing hope that such a model is supported widely across countries.

However, the sheer scale of the crisis has put both the Government as well as host-communities under tremendous stress. UN agencies and humanitarian partners too are in urgent need of resources.

Day after day, week after week, thousands of refugees are being received by countries such as Uganda, Ethiopia and Kenya

In order sustain relief programmes, the Government of Uganda and UN are calling for $8 billion in funding for both emergency response and resilience interventions for the country's refugees and refugee-hosting population over the next four years.

Within this appeal, UNICEF operations require nearly $50 million in 2017 as well as $30 million each year from 2018-2020 to provide critical health, nutrition, water and sanitation, education, early childhood development, adolescent development, and child protection interventions, for both refugee and host community children.

Resources are also needed in Ethiopia and Kenya – together hosting about 800,000 South Sudanese refugees.

In addition to funds, the UN agency has also reiterated its call on governments to adopt its six-point agenda for action to protect refugee and migrant children and ensure their well-being, which was launched ahead of the G7 Summit in Italy in late May.

At the same time, UNICEF also called for efforts ensure that families are kept together and uprooted children stay in school and stay healthy but above all causes that force children to flee in the first place are addressed. 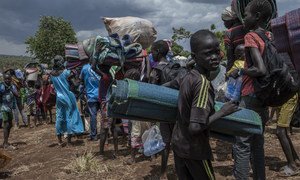