UNICEF/Holt
Women stand in a shelter for girls and women who have endured sexual and gender-based violence, in Mogadishu, Somalia. The shelter is run by the Elman Peace and Human Rights Centre with UNICEF support.
19 June 2017

Marking the International Day for the Elimination of Sexual Violence in Conflict, United Nations Secretary-General António Guterres today paid tribute to the women, girls, men and boys who have suffered the atrocity of sexual violence in conflict, and reaffirmed “our global commitment to eliminate this scourge.”

Marking the International Day for the Elimination of Sexual Violence in Conflict, United Nations Secretary-General António Guterres today paid tribute to the women, girls, men and boys who have suffered the atrocity of sexual violence in conflict, and reaffirmed “our global commitment to eliminate this scourge.”

“Rape and sexual violence in conflict are tactics of terrorism and war, used strategically to humiliate, degrade and destroy, and often to pursue a campaign of ethnic cleansing,” the Secretary-General said in his message for the International Day.

“They should never be downplayed as war's inevitable by-product,” he continued. “Sexual violence is a threat to every individual's right to a life of dignity, and to humanity's collective peace and security.”

This year, the Day is being observed under the theme 'Preventing Sexual Violence Crimes through Justice and Deterrence.'

“We will continue to monitor, report, provide care for survivors and spare no effort in pressing for perpetrators to be held accountable,” he continued.

The Secretary-General stressed, “The United Nations is constantly striving to enhance the capacity of our peacekeeping personnel to protect vulnerable civilians and to pursue justice in the case of all abuses. Each and every one of us has a responsibility to help put a stop to these crimes.”

Mr. Guterres concluded by urging that everyone “use this Day to rededicate ourselves, on behalf of every survivor, to ending sexual violence in conflict and providing peace and justice for all.”

A panel discussion to commemorate the second annual International Day for the Elimination of Sexual Violence in Conflict will be held at UN Headquarters in New York tomorrow.

In June 2015, the UN General Assembly proclaimed 19 June as the International Day to highlight the need to end conflict-related sexual violence, to honour the victims and survivors of sexual violence around the world and to pay tribute to all those who have courageously devoted their lives to and lost their lives in standing up for the eradication of these crimes. 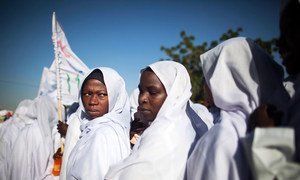 On World Day, Ban declares era of impunity 'over' for sexual violence in war

Marking the first International Day for the Elimination of Sexual Violence in Conflict, United Nations Secretary-General Ban Ki-moon today said that the era of impunity for sexual violence as a tool of war is over, citing a host of landmark rulings against political and military leaders.