The African Union (AU) and the United Nations are proposing 44 per cent and 30 per cent reductions in their troop and police presence in Sudan's Darfur region as a step towards an eventual exit, a senior UN peacekeeping official told the Security Council.

“The reconfiguration of UNAMID is an important milestone towards the completion of its mandate,” said Assistant Secretary-General for Peacekeeping Operations El-Ghassim Wane as he updated the 15-nation Council on the recommended changes to the Mission.

The AU-UN Hybrid Operation in Darfur, referred to by its acronym UNAMID, was formally established by the Security Council on 31 July 2007 through the adoption of resolution 1769.

He stated that the level of armed hostilities remained significantly lower than in previous years, noting that a successful military campaign by the Government has reduced the rebellion to a small presence in Western Jebel Marra and that the number of inter-communal security incidents has decreased. Progress has been made also on the political front, he added.

Yet, given that 2.7 million people remain internally displaced, a number of crucial grievances at the origin of the conflict and key issues related to its aftermath still needed to be addressed, he said.

The reconfiguration would bring the troop ceiling down to 8 battalions from the current 16, or to 8,736 troops, and the police ceiling down to 2,360 from 3,403. It would also include the closure of 11 team sites, the opening of one temporary operating base in the Jebel Marra and the withdrawal of the military from another seven team sites.

Mr. Wane that the political process should have a strong focus on the implementation of the Doha Document for Peace in Darfur, which is now incorporated in the Constitution and contains useful provisions to address the underlying causes of conflict and to create “peace dividends” for the population in Darfur.

Protection of civilians activities in the greater Jebel Marra area would revolve around physical protection and emergency relief, whereas in the rest of the Darfur states it will focus on livelihood issues and rule of law capacities.

On the issue of inter-communal conflict, the Mission should prioritize those that have the potential to cause the highest number of causalities and derail national political processes.

Mr. Wane said that the successful reconfiguration of the Mission requires the full support and cooperation of the Government of Sudan and its institutions, including to ensure that there is no “security vacuum” in areas vacated by UNAMID. 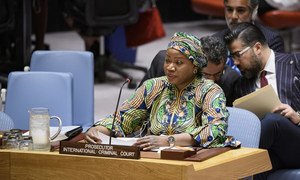 The Prosecutor for the International Criminal Court today reiterated her call for States to arrest and surrender the suspects of alleged genocide, war crimes and crimes against humanity committed in the Darfur region of Sudan, including President Omar Al Bashir.