IOM
In the wake of Cyclone Mora, flood waters flattened many homes in this village in Kalutara, Sri Lanka.
14 June 2017

Following last month's severe flooding and landslides in Sri Lanka that impacted some 630,000 people, the United Nations and humanitarian partners today launched an urgent appeal for more resources to reach those in the worst-hit parts of the country with urgent assistance.

On 25 and 26 May, heavy rains triggered floods and landslides in 15 out of the island nation's 25 districts, sweeping away homes, clinics, schools, roads and water systems. Some 212 people perished and another 79 are still missing.

Immediately after the disaster, UN agencies and relief partners responded with assistance in priority sectors identified by the Government. However, access to the most remote communities was cut off due to destroyed roads and bridges.

As flood waters recede and more areas become accessible, the extent of damage and the response needed is revealed: emergency shelter, sanitation and hygiene, and health services are high on the list. On top of this, damaged infrastructure, particularly related to water and hygiene, has increased the risk of waterborne diseases.

According to the UN Office for Coordination of Humanitarian Affairs, the Emergency Response Plan – amounting to $22.7 million – launched by the Humanitarian Country Team (UN as well as non-UN humanitarian actors in the country), focuses on providing immediate life-saving and protection assistance, emergency livelihood support, and access to basic services to people worst hit.

The Plan also aims to strengthen resilience of affected communities to cope with and recover from the disaster.

It targets about 374,000 people in seven districts, including the four most affected districts – Galle, Rathnapura, Kalutara and Matara.

“The Humanitarian Country Team, with the support of the international community, will continue responding to the needs of those affected by the floods through the implementation of the Emergency Response Plan, paying particular attention to supporting the most vulnerable people in the affected communities,” highlighted Una McCauley, UN Resident Coordinator for Sri Lanka and the Chair of the Team.

OCHA also reported that an allocation of $4 million was made by the UN Central Emergency Response Fund to assist rapid delivery of life-saving shelter, health and food assistance, as well as provide essential non-food items.

Cash assistance will also be provided to affected people to meet their shelter and food needs, in addition to the provision temporary shelters, shelter repair kits, and emergency healthcare and reproductive healthcare support.

The recent disasters hit Sri Lanka when the country was reeling under bad drought which had affected about a million people, leaving them vulnerable to food insecurity.

The floods and landslides have washed away the crops that managed to survive the drought and further increased the urgency of more resources to ensure assistance for people who have already suffered much hardship. 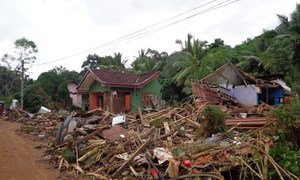 In the aftermath of a devastating tropical storm in Sri Lanka, United Nations agencies are working to provide shelters and other emergency kits while seeking to contain a mosquito-borne disease that is starting to “spiral out of control.”