The bomb shelter at the school in the village of Hranitne, which is located along the ‘contact line’ that divides Government and non-Government controlled areas where fighting is most severe, eastern Ukraine. UNICEF/Kozalov
13 June 2017

Warring parties in eastern Ukraine have repeatedly failed to implement ceasefire agreements, allowing hostilities to escalate and the cumulative death toll to exceed 10,000 as the conflict entered its fourth year, a new United Nations report reveals.

The report, published today, covers the three months through 15 May 2017, during which the UN human rights monitoring mission in Ukraine recorded 36 conflict-related civilian deaths and 157 injuries, a 48 per cent increase from the previous three-month period, according to a news release from the Office of the UN High Commissioner for Human Rights (OHCHR).

The report finds that there were daily ceasefire violations and routine use of small arms and light and heavy weapons in the conflict zone. Such attacks and the resulting damage to critical infrastructure, including schools, hospitals and water facilities, raise serious concerns for the protection of civilians, the report notes, warning that, as summer approaches, there is a risk of further escalation in hostilities, as in previous years.

More than 1.6 million people fled their homes and became internally displaced, while some three million remained in territory controlled by armed groups, the report notes.

Among the issues highlighted in the report: 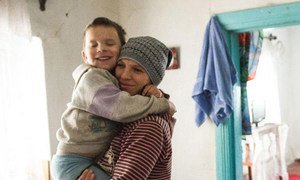 Two-thirds of internally displaced Ukrainians are struggling financially; many without even enough money for food, according to the latest report by the United Nations migration agency on the situation in the crisis-torn country.