The United Nations envoy for the Central African Republic today warned against increasing attacks on civilians and peacekeeping personnel while stressing the need to reenergize the political process to achieve sustainable peace in the conflict-torn country.

“The intensity of the attacks, their premeditated nature and the targeting of ethnic minorities, are a reminder of the darkest moments of the Central African political and security crisis,” said the UN Secretary-General's Special Representative, Parfait Onanga-Anyanga, in his briefing to the Security Council.

“The new and disturbing fact is the systematic and fierce aggression against the peacekeepers,” he added.

The envoy provided an update on the situation in Bangassou, where “political spoilers” demonstrated their intention of carrying out a de facto ethnic cleansing of the town. He said that the UN Multidimensional Integrated Stabilization Mission (MINUSCA) has gradually regained control of the town, but anti-Balaka elements continue to pose a serious threat to civilians and peacekeepers.

He also expressed deep concern about the evolving situation in Bria, where some 80 per cent of the civilian population has been displaced.

Meanwhile, an outbreak of violence in the northwest prefectures of Ouham and Ouham Pende, was abated through a tripartite local mediation initiative at the end of May, with local and traditional authorities firmly in the lead and MINUSCA in a facilitation role.

The security situation in Bangui remains relatively calm thanks to continuous and integrated political and military efforts.

VIDEO: UN envoy Parfait Onanga-Anyanga urges all parties to re-energize the political dialogue, noting the aspirations of the population for lasting peace.

Mr. Onanga-Anyanga said that lately MINUSCA has been under harsh public criticism within CAR with each side expecting MINUSCA to fight its perceived enemy.

Even in the face of those cynics, MINUSCA's resolve remains stronger than ever, he said.

“Each time MINUSCA exhibits strength against armed groups, it is a victory for stability […] Each time tensions are defused through dialogue, it is another gain for peace, and we close the distance to achieving the end-state of the mission a little bit more,” he said.

In this context, he said, “all constructive peace efforts need to be energized,” noting that the National Consultative and Follow-up Committee can provide an essential forum where the Government and the armed groups would not only discuss the modalities of the disarmament, demobilization and reintegration programme but also broader issues related to peace and stability in the country.

He said that he believes the African Peace and Reconciliation initiative remains an essential element to facilitate an inclusive national dialogue with the support of the sub-region and finds recent contacts between the Government and the African Union and other parties encouraging.

Also briefing the Security Council was the Assistant Secretary-General for Human Rights, Andrew Gilmour, who provided an update on the human rights mapping report that covered major violations committed in the country from 2003 to 2015.

The report detailed 620 incidents, including horrific accounts of entire villages being burnt to the ground and multiple incidents of gang rapes of women and gifts, and extra-judicial killings. The vast majority of incidents were attributed to the Séléka /ex- Séléka and the anti-Balaka, and the Central African defence and security forces.

“This long list and patterns of past violations and abuses is unfortunately resuming today,” he said, adding that “this is therefore a timely moment to send an unequivocal message to the perpetrators of violations that their actions are being watched and documented, and that they will be held accountable.” 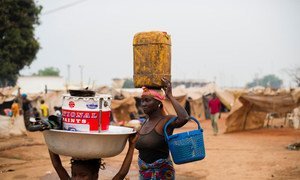