UN Photo/Milton Grant (file)
Fishing boat in the Indian Ocean off the island of Mombasa.

9 June 2017
The first-ever United Nations summit on oceans today wrapped up with a global agreement to reverse the decline of the ocean's health, and more than 1,300 pledged actions for protecting the blue.

“The bar has been raised on global consciousness and awareness of the problem in the oceans,” the President of the UN General Assembly, Peter Thomson, told journalists in New York.

Mr. Thomson, whose native Fiji co-sponsored the event along with Sweden, said the organizers got what they wanted from the conference: “I'm 100 per cent satisfied with the results of this conference. Our aim was high. Our aim was to start the reversal of the cycle.”

The Ocean Conference ends today with the adoption by consensus of a 14-point Call for Action where the participating Heads of State and Government and senior representatives “affirm our strong commitment to conserve and sustainably use our oceans, seas and marine resources tor sustainable development.”

Speaking alongside Mr. Thomson, the Secretary-General of The Ocean Conference, Wu Hongbo, said the negotiated document lists specific measures “to galvanize global commitment and partnerships” for the oceans.

In addition to the political Call for Action, participants – who also included thousands of civil society representatives, academics, artists, financial institutions and other practitioners and activists – pledged actions to conserve and sustainable use the oceans, seas and marine resources. This is the goal of SDG14.

By Friday afternoon, more than 1,300 voluntary commitments had already been registered.

'It's all of us or nothing'

The week-long conference, where some 6,000 people participated, was the first time that the UN brought everyone together to discuss the challenges facing the world's oceans.

The senior official underscored that by “getting the wheels turning” on SDG 14, the conference helped push forward action on all 17 SDGs. finance ocean science, but much more is required to fill the capacity gaps,” he explained.

Topics that were discussed ranged from plastic pollution in the oceans and seas to ocean acidification and illegal fishing – which tie in with topics of alleviating poverty, ending hunger, promoting health, ensuring access to water and sanitation, and so on.

Mr. Thomson attributed the success of the conference to the “wonderful way” in which all the different participants came together to discuss and work together.

He lauded the “openness to civil society, to the science sector, to private society” in breaking down the typical divisions between governments and other sectors. “There's no them and us. It's all of us or nothing.”

In addition to eight plenary meetings and seven partnership dialogues, The Ocean Conference included 150 side events, 41 exhibitions and interviews at the SDG Media Zone.

The mix of personalities and strong support for action brought “creativity and a sense of unity” to the action for oceans, said conference co-chairwoman, Deputy Prime Minister of Sweden Isabelle Lovin. 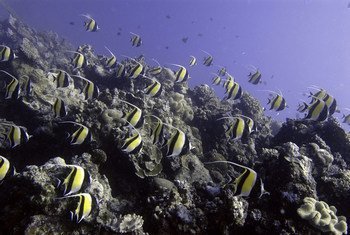 The future of the planet’s oceans is burdened by threats such as climate change, pollution and destructive fishing practices – and the lack of capacities to address these threats – United Nations Secretary-General António Guterres has said, calling for joint global action to ensure “that our oceans are peaceful, safe and bountiful, and remain healthy as our blue home.”