Secretary-General António Guterres today stressed the importance of partnership between the United Nations and the Shanghai Cooperation Organization (SCO) in achieving global development goals and combating some of today's key threats to peace and security, such as terrorism.

“Looking ahead, the United Nations will continue to be your strong partner,” Mr. Guterres told the SCO's Council of Heads of State being held in Astana, Kazakhstan.

The Eurasian political, economic and security union was founded in 1996 in the Chinese city of Shanghai by Kazakhstan, China, Kyrgyzstan, Russia, Tajikistan. It added Uzbekistan in 2001 and India and Pakistan today as its full members.

The UN chief said that the SCO plays a valuable role in promoting mutual understanding, dialogue, stability and development across much of Eurasia, and its members are working together to combat some of today's key threats to peace and security, including terrorism, violent extremism, drug trafficking and organized crime.

“Ultimately, inclusive and sustainable development is the best form of preventing armed conflict and violent extremism,” Mr. Guterres said, asking the SCO members to show leadership in efforts to implement the Paris Agreement on climate change and commitment to fight terrorism and address its root causes.

At a press conference on the same day, Mr. Guterres highlighted the important role of Kazakhstan at the regional and international level.

He said Kazakhstan can play a leading role in promoting cooperation among Central Asian countries toward peace and prosperity of the region, including ways to share water resources, combat terrorism more effectively and create a stronger solidarity in achieving sustainable development.

The Secretary-General said Kazakhstan has been a symbol of dialogue, a symbol of peace, a symbol of the promotion of contacts between cultures, religions and civilizations.

The country is serving on the Security Council and is playing an extremely important mediation role in conflict.

In its capital, Kazakhstan has been hosting the so-named Astana talks on Syria led by Russia, Turkey and Iran. 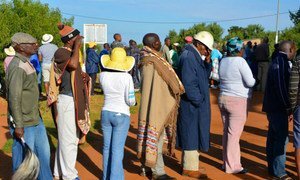 United Nations Secretary-General António Guterres today congratulated the people of the Kingdom of Lesotho on the conclusion of a peaceful National Assembly election.