UNICEF/Fuad
At the Al Sab’een Hospital in Sana’a, Yemen, a doctor checks on a girl suffering from cholera.
8 June 2017

The situation facing children in Yemen is “extremely dire,” a senior United Nations Children's Fund (UNICEF) official warned today, citing a dramatic increase in cases of malnutrition and a massive outbreak of cholera across the war-torn country.

Speaking to the press at the UN Headquarters in New York, Geert Cappelaere, UNICEF Regional Director for the Middle East and North Africa, highlighted a dramatic increase in the number of children with malnutrition.

When he left Yemen four years ago, there was already a huge caseload of children with severe acute malnutrition. On his recent visit to Yemen, he found the caseload having since doubled, with nearly half a million children under the age of five suffering the most extreme and visible form of undernutrition.

To make the matter worse, the country's medical care system is on the verge of collapse, or “half-collapsed,” he said, and the half of the health system that is partially functional is operating “on a zero budget.” Moreover, health workers have not received salaries for eight to nine months.

“Children in Yemen have suffered enough. It is high time that all those who are responsible realize that the country is at the verge of collapse; that one of Yemen's biggest assets, its children, are getting killed,” he said.

The situation in Yemen must be on the radar of the international community, he stressed, calling for a scaled-up support. 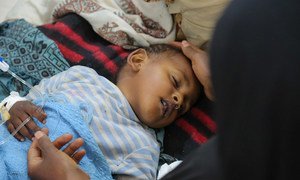 With about 70,000 cholera cases reported with nearly 600 fatalities in Yemen, the United Nations Children's Fund (UNICEF) today warned that an already dire situation for children is turning into a disaster.