UNICEF/Kate Holt
A woman stands in a shelter for girls and women who have endured sexual and gender-based violence, in Mogadishu, the capital of Somalia.
7 June 2017

A United Nations-appointed human rights expert today said that gender-related killings and domestic murders or intimate partner violence should be understood as forms of arbitrary execution and thus violates the right to life.

“Violations of the right to life have usually been understood to be killings involving State officials,” said Agnes Callamard, Special Rapporteur on extrajudicial, summary or arbitrary executions, in her first report to the UN Human Rights Council, according to a news release from the Office of the UN High Commissioner for Human Rights (OHCHR).

“It is time to recognize that gender-related killings, such as domestic and intimate partner violence, 'honour killings,' or killings of LGBTQI persons, can also amount to arbitrary executions.”

She urged Governments to pay greater attention to the significant role that gender plays in how likely people are to be arbitrarily deprived of their right to life.

“The fact is that gender plays an absolutely central role in predicting people's ability to enjoy their human rights in general, and their right to life in particular. It is an extraordinarily accurate predictor of people's enjoyment of the right to life. Misogyny persists at all levels of society,” she said.

Citing global statistics showing that almost half of female homicide victims are killed by family members or intimate partners, compared with just over five per cent of male victims, Ms. Callamard stated that there is unmistakable evidence of women's disproportionate risk of suffering harm and violence.

Her report details extreme rates of violations of the right to life perpetrated against women and girls with disabilities, indigenous women and transgender people amongst others.

Noting that it was clear that gender-based killings fell within her mandate to challenge arbitrary executions, she said: “A gender-sensitive perspective seeks to bring gender-based executions squarely within the mandate, [this includes] the importance of revealing the kinds of systemic discrimination which are currently being perpetrated, in order to remedy them and enable all people to enjoy equal rights.”

As such the report highlights that gender-based violations of the right to life stem not only from intentional acts, but also from a lack of basic conditions and services that guarantee life, such as access to food, water, health services and housing. 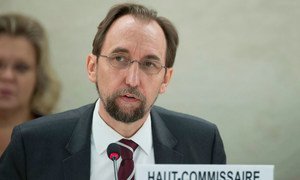 In a major address in Geneva, the United Nations human rights chief today stressed that denying access or not cooperating with UN bodies would not diminish scrutiny of a Government’s human rights record.