UN/Lulu Gao
Boats bob in the water at Buccoo Bay, Tobago. Tourism is the top industry on the island, employing more than half of the approximately 60,000 residents.
7 June 2017
Climate and Environment

Oceans comprise roughly three-quarters of the Earth’s surface and play an essential role in human well-being, producing half the oxygen necessary for life on the planet. They also serve as the backdrop for another important component of a well-rounded life: recreation.

The multiple benefits provided by the world’s oceans, seas and marine resources are the focus of the first-ever Ocean Conference taking place this week at UN Headquarters in New York.

The Conference seeks to achieve the targets laid out under Sustainable Development Goal (SDG) 14, including galvanizing action on ocean-related issues such as protecting coral reefs, reducing plastic pollution, and addressing the impact of climate change.

Spending time beside, in, or on the ocean is a major reason why millions of people escape to destinations such as Trinidad and Tobago, an island nation in the southern Caribbean.

The diversity of its people – mainly descendants of enslaved Africans and indentured workers from India, though indigenous Caribs, Syrians, Lebanese, Chinese and a smattering of other nationalities have added to the gene pool – is reflected in the marine and coastal environments, home to fish, sharks, turtles, manatees, mangrove, sea grasses, coral reefs and numerous invertebrates and other marine organisms.

The ocean is seen as a major tourist attraction in the Caribbean. Supported by the UN, various initiatives are unfolding in the region with the aim of growing sustainable tourism, and better preserving the marine environment.

Neila Bobb Prescott with the Food and Agriculture Organization (FAO) is the Chief Technical Advisor for a project that supports improved management of the nation’s forests and other protected areas, some of which are linked to the sea. She summarized the significance of the ocean to “Trinis,” as citizens proudly call themselves.

“Oceans are part of what it means to be Trinidadian,” she told UN News. “We have rituals when your baby is born. There’s a specific time when you take them to the beach to dip their feet in the saltwater to kind of bring them to the age. When you’re ailing and there’s something wrong with you, you go to the sea for a specific purpose, and then you drink some of the salt water, too, if you have troubles with your stomach. So the sea is part of us in terms of our culture…it’s just part of us.”

Naturally, going to the beach to unwind is also part of the culture, and citizens and visitors swarm spots such as Maracas Bay in Trinidad, famous for stands selling “bake and shark,” a fried fish sandwich that can be seasoned with an endless array of toppings. But for serious relaxation, people head for the sister island of Tobago, a 20-minute flight from the high-octane capital, Port of Spain.

Tourism is the island’s mainstay, employing more than half the roughly 60,000 residents. John Arnold, Senior Tourism Coordinator in the Tobago House of Assembly, the local government, said ocean conservation is a given for a destination billed as being “clean, green, safe, serene.”

While the UN reports that some 20 per cent of the world’s coral reef has been lost and another 20 per cent degraded, those in Tobago are still “fairly intact,” according to coral reef ecologist Neil Cook with the Environmental Research Institute Charlotteville (ERIC), recipient of a small grant administered through the UN Development Programme (UNDP). 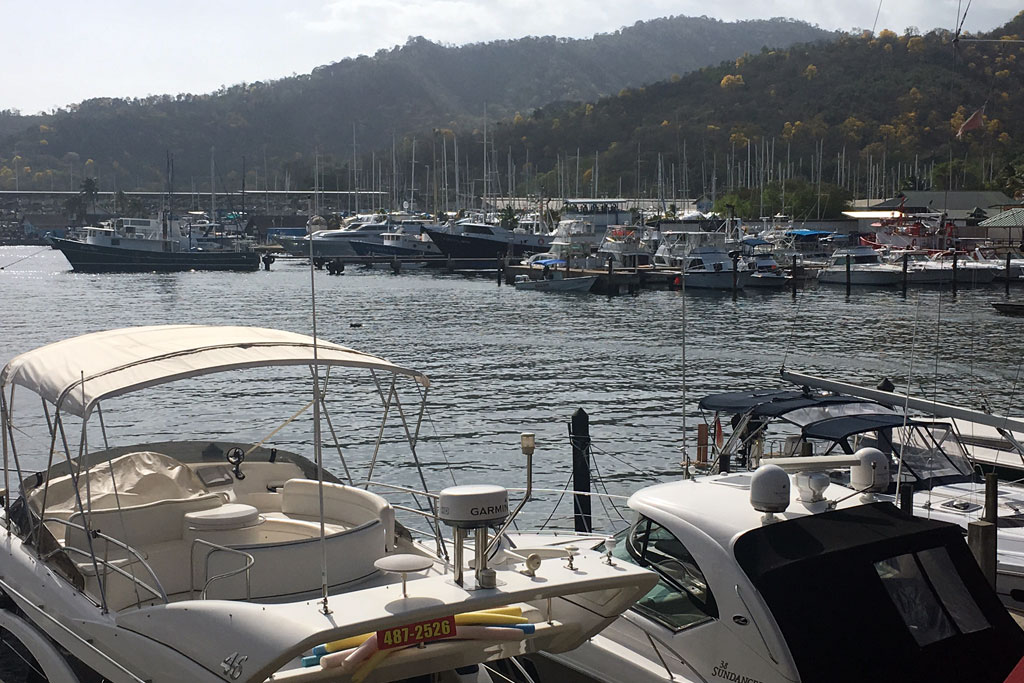 A marina in Chaguaramas, Trinidad and Tobago. Children taking lessons at the nearby Trinidad and Tobago Sailing Association learn how caring for the ocean has an impact on their sport. Head coach Earl Tobias said he instructs his students to pick up any garbage found floating in the water. Photo: UN/Lulu Gao

World-class diving draws people to the sleepy village of Speyside, where Sean Robinson opened the first dive shop some 30 years ago. On a recent Saturday afternoon he was fresh from taking SCUBA enthusiasts into the emerald waters of a location known as the Cathedral, where they were greeted by “a beautiful eagle ray” along with barracudas and stingrays.

“We here have been fairly lucky that the quality of the reefs has just about remained the same, but the challenges that we are getting now here in the environment is with this whole concept of global warming,” he said. “We are now getting a problem with something that is very strange, which is sargassum.”

No doubt islanders will not soon forget the carpet of reddish-brown sargassum seaweed which fouled the Atlantic shoreline in 2015 and cost millions to clean up.

Sargussum originates in a swirling section of the North Atlantic near Bermuda known as the Sargasso Sea, first identified by 15th century Portuguese mariners. It has affected other parts of the Caribbean, which is the most tourism-dependent region in the world, according to the UN Economic and Social Commission for Latin America and the Caribbean (ECLAC).

Helping governments in 33 of the region’s countries to address seaweed infestations, and other challenges, is Julio Orozco, Director of Sustainable Tourism with the Association of Caribbean States (ACS), a UN partner.

“Right now, we are trying to support projects that are taking care of all these problems that we experience in the whole Caribbean Basin like sargassum, like coastal erosion, which has been a very difficult problem with climate change,” Mr. Orozco said. “Since 2001, the Association has been promoting the Declaration of the Sustainable Tourism Zone in order that the countries, through specific destinations, can implement indicators of sustainability in order to protect their different resources: not only the sea, of course, but also fauna, flora and cultural resources.” 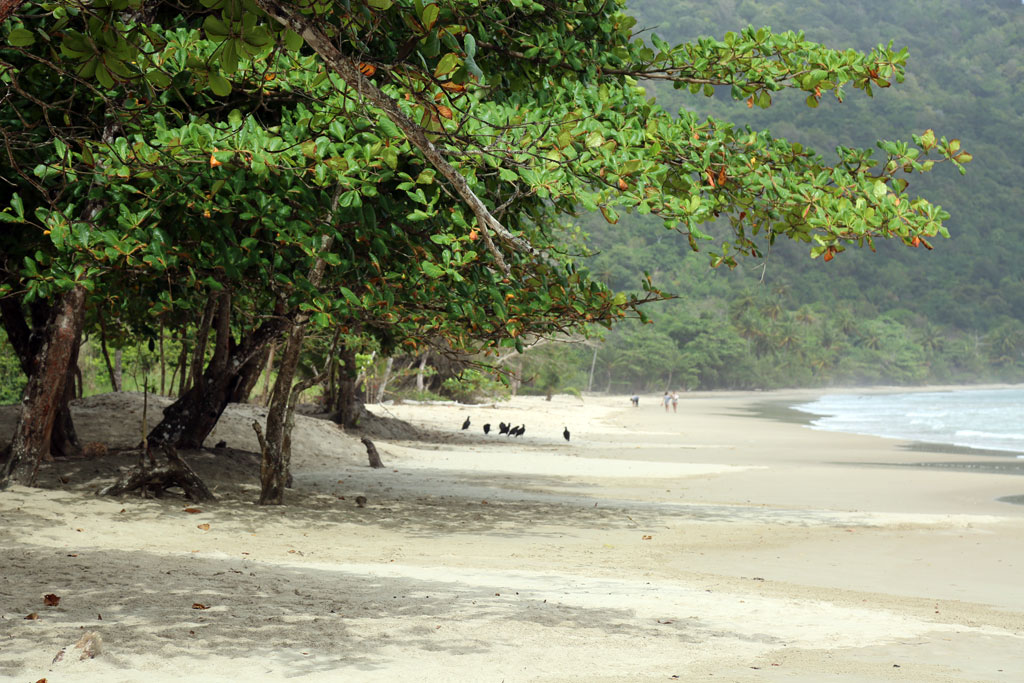 Las Cuevas Beach, located a short drive from Port of Spain, the capital of Trinidad and Tobago, is one of 17 beaches across the island nation where leatherback turtles lay their eggs between March and August. For the past five years, forest wardens have set up camp there during Easter week to educate the public about the need to protect the species. UN/Lulu Gao

Back on Trinidad’s north-eastern coast, Stephen McClatchie has been calling for action to counter a problem affecting his village, Toco, situated at the part of the island that is physically closest to Tobago.

As head of the group Stakeholders Against Destruction, or S.A.D., for Toco, he lamented the long weekend and holiday hordes who come to Salybia Bay to hang out, or “lime,” to use the local expression.

“Imagine hundreds of people in a beautiful bathing area with no established facility for human needs,” he said. “When collectively that kind of behavior is taking place in an area like that, you understand the dangers to health, the damage to the environment, and for years, for decades, we have been pleading with the powers that be to do something about it, but very little or nothing is being done.”

Weekend “limes” also sour the serenity of Las Cuevas Beach on the other side of Trinidad, which has received certification for its water quality from Denmark-based environmental group Blue Flag. It is among 17 beaches in Trinidad and Tobago where leatherback turtles, an environmentally sensitive species, come to nest. 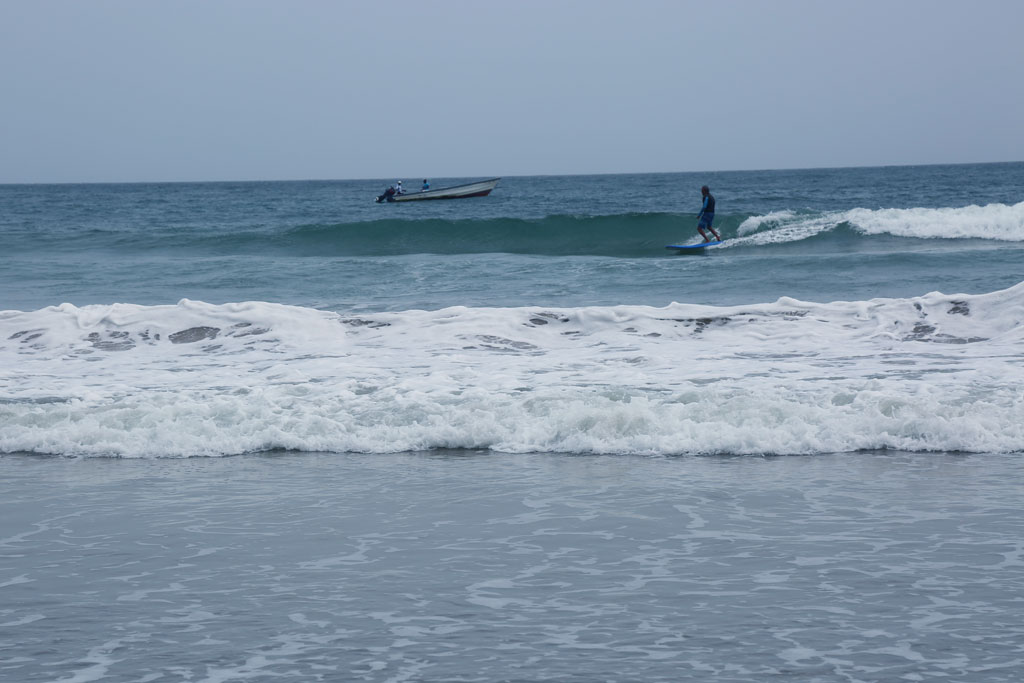 Surf instructor Jonathan Torry (right) spends practically every day at Las Cuevas Beach on the north coast of Trinidad. He has seen stingrays, manta rays and a pod of dolphins while out surfing. Photo: UN/Lulu Gao

Despite the accolades, veteran surf instructor Jonathan Torry, who is at the beach practically every day, still has to fish the odd beer bottle or other garbage from the sand.

He believes surfers are just naturally environmentally conscious and protective of the ocean.

“As surfers, we look forward to being on the ocean all the time. To us, it’s like heaven,” he said, the wind and waves drowning his words. “We cannot exist without the ocean. If we didn’t have the ocean and we didn’t keep it clean, to us, life would be very simple, very blah.”

In February of this year, the UN Environment Programme (UNEP) launched the #CleanSeas campaign to combat marine litter by reducing plastic production and use. It warned that unless people stop dumping bottles, bags, cups, straws and other plastic items, by 2050 there could be more plastic in the oceans than fish.

Ocean stewardship is also a byproduct of sailing lessons at the Trinidad and Tobago Sailing Association, which uses Hart’s Cut Bay in Chaguaramas as a classroom. Students like Luke Frankland, 11, have already grasped the main message of SDG 14: life on land affects life below water.

“I think we need to start recycling more and being more mindful of where we put our garbage when we’re done with it,” he said. “Some people just throw it on the floor when they’re done with it. They should put it in a bin, or, even better, recycle it. Almost always it ends up in the ocean. It harms us in some ways, but it harms the sea creatures more.” 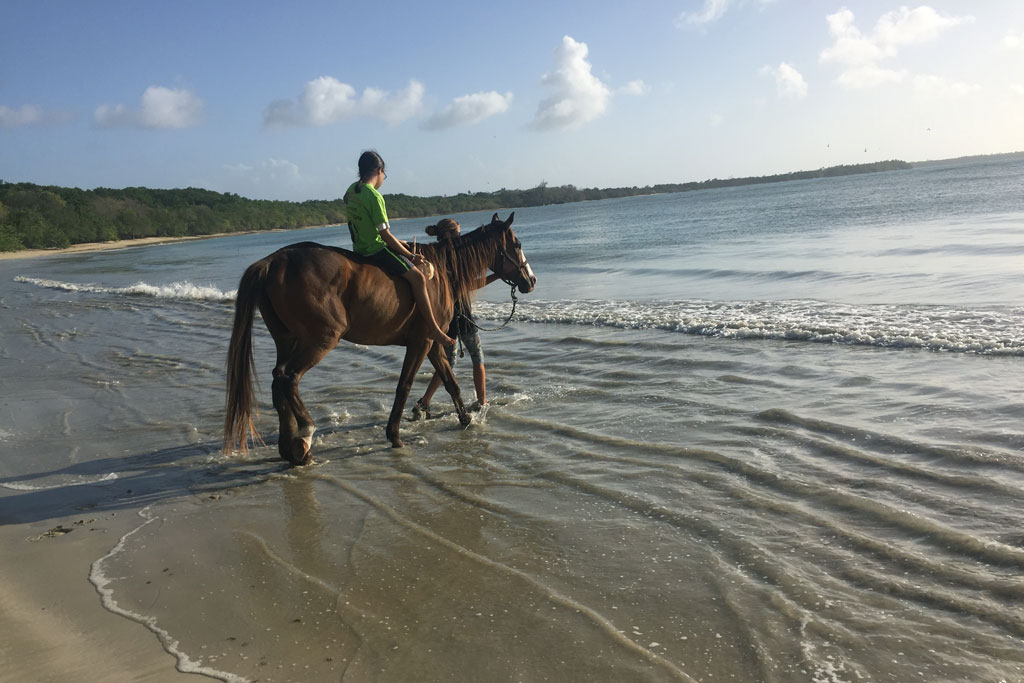 The Healing with Horses Foundation in Tobago provides a form of alternative therapy for children with disabilities, or who come from troubled homes. The children interact with horses in a “magical park” decorated with affirmative messages, a homemade dream catcher and seesaws crafted from discarded dining chairs. Best of all, they get to ride the horses into the cool waters of Buccoo Bay. Photo: UN/Dianne Penn

Life lessons of a different kind are also being learned in the waters at Buccoo Point, Tobago, home to the Healing with Horses Foundation.

There, children with disabilities, or who come from troubled homes, develop confidence and leadership skills by interacting with 11 rescued ponies, some of whom have challenges of their own.

“When we are with the horse in the ocean, the child feels not only carried by the horse but also carried by the water,” said German native Veronika Danzer-La Fortune, who runs the foundation alongside her Trinidadian husband, Lennox. “The water has a very soothing, calming effect. The water also helps the children to relax their muscles.”

Healing with Horses Foundation has found a friend in the UN Information Centre (UNIC) for the Caribbean Area, based in Trinidad and Tobago’s capital, Port of Spain.

In addition to participating in a summer camp in 2016, the UN office has supplied the organization with information about UN priority areas such as human rights, the rights of people with disabilities, autism awareness and, of course, the Sustainable Development Goals.

As the international community focuses this week on preserving the health of global oceans and seas, the United Nations agencies on agriculture, environment and trade are committing to the sustainable trade of fisheries.