UNICEF/UN035756/LeMoyne
A four-year-old boy and his father Marshall Mejia, play in the water during a visit to the seashore, in their hometown of Dangriga, on the south-eastern coast of Belize.
6 June 2017

As more than 90 countries prepare to mark Father's Day later this month, prominent figures in sports and entertainment have joined 'Super Dads,' a campaign launched today by the United Nations Children's Fund (UNICEF) that celebrates a father's essential role in a child's early cognitive development.

As more than 90 countries prepare to mark Father's Day later this month, prominent figures in sports and entertainment have joined 'Super Dads,' a campaign launched today by the United Nations Children's Fund (UNICEF) that celebrates a father's essential role in a child's early cognitive development.

The Super Dads initiative is a part of a larger campaign called #EarlyMomentsMatter, which aims to bring awareness to the significance of early childhood experiences on a child's future.

Mahershala Ali, David Beckham, the All Blacks, Daniel Cormier, Novak Djokovic, Lewis Hamilton, Hugh Jackman, Sachin Tendulkar, Thalía and Chris Weidman are among the celebrities who will be featured for their “super dad” moments on UNICEF's Instagram and Twitter. These UNICEF ambassadors and supporters have also shared their thoughts on the importance of their own fathers in their childhoods.

“When I was a young child, my father gave me the right amount of love, freedom and support to shape who I am today,” said UNICEF Ambassador Sachin Tendulkar. “Every kid needs protection, love, good food and play to support growth and development, and it's up to both parents to provide these.”

Stars are not the only super dads that will be featured. Moving stories of fathers raising their children under difficult circumstances will be also posted alongside pictures and videos of celebrity dads.

One such story is of South Sudanese refugee Idro, a father of three daughters in Uganda's Bidi Bidi refugee settlement. “If I can't fulfil for my family, I am not happy,” said Idro, reflecting the fatherly compassion that the campaign advocates for. Idro fled from violence with his family in order to protect his daughters and continues to provide them with as much support as possible. He tries to provide a stable environment by playing games and comforting his daughters despite their hardships.

“Good parenting for young children living in highly stressful conditions like conflict or extreme poverty can even provide a buffer, helping them to fully develop despite adversity,” said Pia Britto, UNICEF Chief of Early Childhood Development. Children's brains form important neural connections within the first 1,000 days, which could decide their health, learning abilities, and income in later years.

Research also shows that positive interactions with fathers allow children to have better psychological health and life satisfaction in the future. Britto urges the private sector and governments to “break down the employment and societal obstacles” that prevent parents from giving their children the highest starting point possible.

Super Dads calls for families across the world to join in by sharing photos and videos of their own with the hashtag #EarlyMomentsMatter, which will be featured in a gallery for the campaign. Additionally, UNICEF will post the best submissions on its various digital platforms. 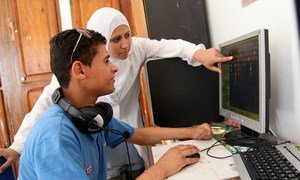