IOM
In the wake of Cyclone Mora, flood waters flattened many homes in this village in Kalutara, Sri Lanka.
6 June 2017

In the aftermath of a devastating tropical storm in Sri Lanka, United Nations agencies are working to provide shelters and other emergency kits while seeking to contain a mosquito-borne disease that is starting to “spiral out of control.”

Heavy flooding, landslides and flash floods caused by Tropical Cyclone Mora in Myanmar and Bangladesh, and torrential monsoon rains have affected some 684,000 people in south and central Sri Lanka. The flooding, which is believed to be the worst in over a decade, has left at least 212 people dead and 79 missing.

Sri Lanka's Disaster Management Centre (DMC) estimates that over 2,500 houses were destroyed and nearly 15,900 damaged. These numbers could rise as data from damage assessments is compiled in the coming weeks.

Nearly 22,000 people are still sheltering in over 200 overcrowded sites, including schools, temples and churches, the agency said.

“There will likely be a need to track displacement, return, and site closure. People will need shelter and other non-food relief items (when they leave the sites) and we will need to ensure that aid is distributed at the location most useful and appropriate for each affected family,” said IOM Sri Lanka Chief of Mission Giuseppe Crocetti.

IOM will co-lead the emergency shelter and non-food item sector, which is appealing for $6.5 million.

“So far we have delivered water and sanitation supplies, we are working on education supplies, strengthening health systems and rehabilitating basic health services and working on disease control for both diarrhoea and dengue which is starting to spiral out of control,” said UNICEF country representative Tim Sutton.

He said flood waters have not receded in the southern district of Matara, raising fears of mosquito-borne disease transmission. He noted that so far this year there have already been more than 53,000 cases of dengue, a mosquito-borne tropical disease, which causes severe flu-like symptoms. It is a leading cause of death among children and adults in Sri Lanka.

♦ Receive daily updates directly in your inbox - Subscribe here to a topic.
♦ Download the UN News app for your iOS or Android devices.
Storm 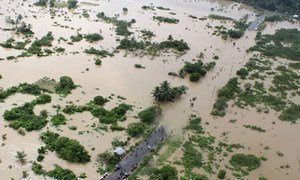 According to Sri Lanka’s Disaster Management Centre (DMC), the South Asian country is combating floods and mudslides in the wake of Tropical Cyclone Mora, while the United Nations Migration Agency (IOM) today deployed three rapid assessment teams to the most affected districts, where some 177 people have died and 109 remain missing.