After 50 years of Israeli occupation, 'now is the time' to create Palestinian state – UN chief

UNRWA/Isabel de la Cruz
The West Bank barrier, along with checkpoints, roadblocks and permit system, has created a closure regime that has had a dire effect on all aspects of life for Palestine refugees.
5 June 2017

“Now is the time to end the conflict by establishing an independent Palestinian state, living side by side in peace and security with the State of Israel,” Mr. Guterres said in his statement on the 50 year occupation.

The occupation of the West Bank, East Jerusalem, Gaza and the Syrian Golan, which displaced hundreds of thousands of Palestinians and Syrians, has imposed a heavy humanitarian and development burden on the Palestinian people, he said.

Among them are generation after generation of Palestinians who have been compelled to grow-up and live in ever more crowded refugee camps, many in abject poverty, and with little or no prospect of a better life for their children, he added.

Ending the occupation that began in 1967 and achieving a negotiated two-state outcome is the only way to lay the foundations for enduring peace that meets Israeli security needs and Palestinian aspirations for statehood and sovereignty, he stressed.

“Now is not the time to give up on this goal” but is the time to return to direct negotiations to resolve all final status issues on the basis of relevant UN resolutions, agreements and international law, Mr. Guterres said.

He warned that continued settlement construction and expansion, violence and incitement and the illicit arms build-up and militant activity in Gaza risk creating a one-state reality that is incompatible with realizing the legitimate national and historic aspirations of both peoples.

He recalled that in 1947, the world recognized the two-state solution and called for the emergence of “independent Arab and Jewish states” on the basis of UN General Assembly resolution 181.

On 14 May 1948, the State of Israel was born, but almost seven decades later, “the world still awaits the birth of an independent Palestinian state,” he said, offering once again to work with all relevant stakeholders to support a genuine peace process. 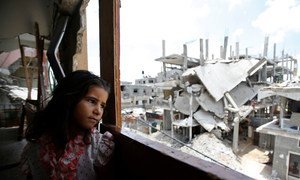 Israeli constraints on movement and economics, along with the blockade on the Gaza Strip and internal political strife, are at the root of Palestinian suffering in the occupied territory, according to two separate United Nations reports released as the Israeli occupation enters its fiftieth year.