UN Photo/Eskinder Debebe (file)
Young residents of the National Tapajos forest swim in the river to cool-off from the intense heat of the Brazilian sun.

5 June 2017
With the theme of this year's World Environment Day – 'Connecting People to Nature' – aimed at highlighting the well-documented physical and mental health benefits of being in nature, the United Nations is today flagging the vast benefits of such engagement, from food security and improved health to reliable water supply and climatic stability.

With the theme of this year's World Environment Day – 'Connecting People to Nature' – aimed at highlighting the well-documented physical and mental health benefits of being in nature, the United Nations is today flagging the vast benefits of such engagement, from food security and improved health to reliable water supply and climatic stability.

“This is our environment. It is the keystone of a sustainable future. Without a healthy environment we cannot end poverty or build prosperity,” said Secretary-General António Guterres in a video message on the Day, commemorated annually on 5 June.

Pointing to land, water oceans, forests, and “the air that we breathe,” the UN chief reaffirmed that everyone has a role to play “in protecting our only home,” including using less plastics, driving less, wasting less food and “teaching each other to care.”

“On World Environment Day – and every day – let us reconnect with nature. Let us cherish the planet that protects us,” concluded Mr. Guterres.

World Environment Day is the largest global day for positive environmental action. This year, the main celebrations are hosted by Canada. The UN Environment Programme (UNEP) says thousands of people across six continents are joining massive clean-ups of beaches and parks, countries are protecting 1,600 square kilometres of land, and over 30 iconic landmarks, including the Empire State Building, 'Christ the Redeemer' statue in Rio, and Niagara Falls, will light up in green.

The Day's theme encourages people to simply 'get back outdoors'

The 2017 edition of the Day coincides with the opening at UN Headquarters in New York of The Ocean Conference, the first-ever high-level global meeting on conservation and sustainable use of the oceans, seas and marine resources for sustainable development. The Governments of Fiji and Sweden have the co-hosting responsibilities of the Conference.

The 2030 Agenda resolves “to ensure the lasting protection of the planet and its natural resources,” in particular, the Agenda's associated Sustainable Development Goals (SDGs) 14 and 15 focus on respectively conserving and sustainably using the oceans, seas and marine resources and on protecting, restoring and promoting sustainable use of land ecosystems.

“Our entire modern life, with its skyscrapers and smartphones, stands on a delicate foundation of natural systems,” said UN Environment chief Erik Solheim in remarks on the Day. “Today, these foundations are shaking, undermined by man-made climate change, deforestation and extinctions. No amount of advanced technology will save us if we destroy and pollute our natural lifeblood.”

Billions of rural people around the world spend every working day 'connected to nature' and appreciate their dependence on natural water supplies and how nature support their livelihoods in the form of fertile soil. They are among the first to suffer when ecosystems are threatened, whether by pollution, climate change or over-exploitation.

'Connect with nature' by visiting an iconic UNECSO-designated site

In line with the theme of the Day, 'Connecting People with Nature,' Irina Bokova, the Director-General of the UN Educational, Scientific and Cultural Organization, invited everyone to take time out from busy lives and to visit one of UNESCO's sites – including Biosphere Reserves, many Global Geoparks and iconic World Heritage sites – often overlying key strategic surface or groundwater resources and which bring together more than 2,000 exceptional sites around the world.

“All of them employ local people and have their doors wide open to the public, because we know now this is the surest path to more inclusive and sustainable development, respectful of the boundaries of the planet,” she said, calling women and men everywhere “to connect with the nature around them that gives beauty, meaning and harmony to the lives we lead.”

For her part, Cristiana Pa?ca Palmer, Executive Secretary of the Convention on Biological Diversity (CBD) announced that the total area covered by Marine Protected Areas has increased nearly 20-fold since 1993 and has more than doubled since 2010.

“With recent commitments made by governments around the globe, the world is on track to protect over 10 per cent of the globe’s marine areas by 2020,” she said, recalling that this target was agreed by Parties to the Convention in 2010, and was also adopted by UN Member States as part of SDG 14.

Focusing only on areas under national jurisdiction, 14.4 per cent are currently protected; this is projected to rise to over 23 per cent by 2020.

But while tremendous progress is being made in reaching this target for protected areas in our oceans, and the Strategic Plan for Biodiversity 2011-2020 has been a catalyzing force” Ms. Pa?ca Palmer stressed that increased efforts are still needed to ensure that the growing network of Marine Protected Areas is representative of the different ocean ecosystems.

PODCAST: Running – and telling stories – to raise awareness about the global water and sanitation crisis

UN mourns passing of population agency chief Babatunde Osotimehin, 'a champion of health for all' 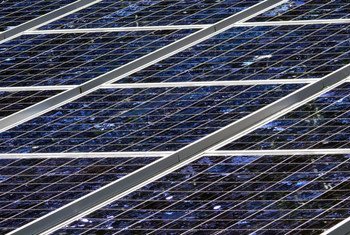 2 June 2017
Underscoring the threats posed by climate change – those already apparent, as well as those sure to impact the future of the planet – United Nations Secretary-General António Guterres today urged Governments worldwide to “stay the course” and remain committed to climate action.