Briefing the Security Council for the final time as the United Nations mission in Côte d'Ivoire draws down, the UN envoy for the country thanked the Government for its support and said that though more needs to be done, but the West African nation has shown its resolve for a peaceful, stable and prosperous future.

“Since the post-elections crisis that roiled Côte d'Ivoire only six years ago, demonstrable progress has been made on all fronts,” highlighted Aïchatou Mindaoudou, the

Special Representative of the Secretary-General for the country and the head of the UN Operations in Côte d'Ivoire, known by its French acronym, UNOCI.

The mission, set up in April 2004, will close at the end of June. Its complement of uniformed personnel had already left the country in February and the phased reduction of its civilian personnel was completed in April.

Noting the lessons learned by the mission during the course of its deployment, Ms. Mindaoudou highlighted the strong political mandate accorded to the mission as well as the confidence placed by the Security Council.

In particular, she hailed the quick reaction force established within UNOCI – with a mandate to respond in Liberia in support of mandate of the UN mission in that country (UNMIL) – as “among the most forward-leaning intermission cooperation initiatives in the history of UN peacekeeping.”

She also said that the support of the coalition of international partners, all working in pursuit of same goal had been vital.

Lastly, noting that no peacekeeping operation can substitute for national political will or national efforts to overcome the issues that led to conflict, the head of UNOCI noted that though more needed to be done in order to address the remaining fragilities, but Côte d'Ivoire has demonstrated its determination to do the work required for the country to regain its former place as a pillar of peace, stability and economic prosperity in West Africa.

In conclusion, Special Representative Mindaoudou expressed her appreciation to all partners for their collaboration and cooperation and voiced admiration for the people and Government of Côte d'Ivoire – at the local, regional and national levels.

“They, themselves, were the decisive factor in turning the page on crisis and conflict and, I have no doubt, whose continued determined efforts will ensure that the hard-won peace will be sustained.”

Earlier today, Côte d'Ivoire was elected a non-permanent member of the Security Council for a period of two years. It will assume its seat on 1 January 2018. 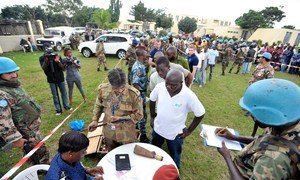 After 13 years, the United Nations is completing the peacekeeping phase of its engagement with Côte d'Ivoire, after successfully assisting the country in restoring peace and stability following the post-2010 election crisis.