With about 70,000 cholera cases reported with nearly 600 fatalities in Yemen, the United Nations Children's Fund (UNICEF) today warned that an already dire situation for children is turning into a disaster.

“Cholera doesn't need a permit to cross a checkpoint or a border, nor does it differentiate between areas of political control,” said UNICEF Regional Director, Geert Cappelaere, following his visit to the war-torn country.

“Cholera is spreading incredibly fast in Yemen […] The number of suspected cases is expected to reach 130,000 within the next two weeks,” he warned.

He said he witnessed harrowing scenes of children who were barely alive - tiny babies weighing less than two kilos – fighting for their lives at one of the few functioning hospitals he visited.

“But they are the lucky ones. Countless children around Yemen die every day in silence from causes that can easily be prevented or treated like cholera, diarrhoea or malnutrition,” he said.

He said health workers are racing against time to prevent cholera from killing more children. They are dedicated and committed, despite not receiving their salaries in almost nine months.

For its part, UNICEF has been working with partners to respond since the start of this outbreak four weeks ago, providing safe water to over 1 million people across Yemen and delivered over 40 tonnes of lifesaving medical equipment – including medicine, oral rehydration salts, intravenous fluids and diarrhoea disease kits.

He called for stepping up global support, as UNICEF urgently requires $16 million to prevent the outbreak from spreading further.

“But most importantly, it is time for parties to the conflict to prioritise the boys and girls of Yemen and put an end to the fighting through a peaceful political agreement. This is the ultimate way to save the lives of children in Yemen, and to help them thrive,” he said. 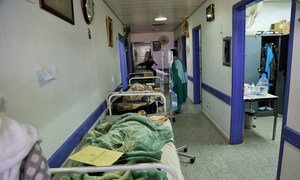 Amid an “unprecedented” increase in suspected cholera cases in war-torn Yemen – where medical facilities are teetering on the edge of collapse – the United Nations Children’s Fund (UNICEF) has stepped up its response but warned that time may be “running out.”