UNICEF
A Palestinian girl inside her family’s partially destroyed home, looks at the destruction outside, in the Shejaiya neighbourhood of Gaza City.
31 May 2017

Israeli constraints on movement and economics, along with the blockade on the Gaza Strip and internal political strife, are at the root of Palestinian suffering in the occupied territory, according to two separate United Nations reports released as the Israeli occupation enters its fiftieth year.

“Occupation policies and practices remain the key cause of humanitarian needs in the oPt [occupied Palestinian territory],” the UN Office for the Coordination of Humanitarian Affairs (OCHA) said in its annual report.

David Carden, the head of OCHA in the occupied territories, attributed the hardship to a “pervasive” lack of protection and accountability for international law.

“At its heart, the crisis in the oPt [Occupied Palestinian Territory] is one of a lack of protection for Palestinian civilians – from violence, from displacement, from restrictions on access to services and livelihoods, and from other rights violations – with a disproportionate impact on the most vulnerable, children in particular,” he said in the 2016 humanitarian overview, Fragmented Lives.

Among the issues raised in the report were the restriction on Palestinian movement and access to basic services. Despite some easing of measures, OCHA noted that the number of Palestinians who Israeli officials allowed to leave Gaza had declined in the second half of 2016. The Rafah crossing – the sole crossing between Gaza and Egypt – was only opened for 44 days last year. While in the West Bank, OCHA recorded 572 movement obstacles, with an additional 110 obstacles in the Israeli-controlled Hebron city.

In addition, Israeli authorities in 2016 demolished or seized some 300 donor-funded structures provided as humanitarian aid to Palestinians, with a value estimated at more than $730,000.

The report also noted the impact from the internal conflict among Palestinian politicians, with division between President Mahmud Abbas in the West Bank and Hamas in Gaza.

The “stringent” restrictions on movement and economic activities are also cited by the International Labour Organization (ILO), where the Director-General each year reviews the situation for workers in the West Bank, including East Jerusalem, and Gaza, Israel and the occupied Syrian Golan.

The 2017 edition of The situation of workers of the occupied Arab territories will be presented to the International Labour Conference in June.

The report noted that while economic growth is taking place in West Bank and Gaza, it “is not enough to improve livelihoods, and it barely translates into employment gains.”

“The harsh reality facing all efforts to strengthen the Palestinian labour market is the control that the occupation exercises over the Palestinian borders and the access to land, water and natural resources,” ILO Director-General, Guy Ryder, says in his foreword to the report.

According to the report, more than one-quarter of the Palestinian labour force is unemployed, rising to 40 per cent among young people.

The situation is “particularly dire” for the two million Palestinians living in Gaza, where 60 per cent of youth with school degrees are jobless, and where movement for work is next to impossible – further hampered by long waiting times and overcrowding at check points.

The report warns that as work prospects bleaken for Palestinian youth, the frustrations can fuel radicalization and violence.

The report calls for the reanimation of the peace process with a view to achieving the two-state solution.

“One of the aims of the Oslo agreements was to establish well-functioning labour markets for both Israel and the Palestinians. This remains little more than a distant aspiration,” Mr. Ryder said.

He called for the promotion and application of social justice and decent work as “vital cornerstones of the peace effort.”

In the report, the head of ILO also urged the international community to stay engaged in the Middle East, with a view to fostering peace and full statehood for the Palestinians. 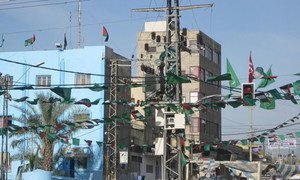 The United Nations Middle East envoy today cautioned that unless urgent measures are taken to de-escalate the crisis now spiralling out of control in the Gaza Strip, there will be devastating consequences for Palestinians and Israelis alike.