UN
Over half a million people have been affected by flooding and landslides in central and southern Sri Lanka.
30 May 2017

According to Sri Lanka’s Disaster Management Centre (DMC), the South Asian country is combating floods and mudslides in the wake of Tropical Cyclone Mora, while the United Nations Migration Agency (IOM) today deployed three rapid assessment teams to the most affected districts, where some 177 people have died and 109 remain missing.

Secretary-General António Guterres said he was “deeply concerned by the devastating impact caused by Cyclone Mora on Sri Lanka and Bangladesh,” adding that the UN stood “ready to scale up its support to the government-led response efforts in both countries.”

Since heavy rains on Friday, most of the deaths were caused by landslides.

In a press statement, IOM maintained that while its teams travel to the four worst-hit districts of Ratnapura, Galle, Matara and Kalutara – in the south and centre of the country – the Government indicated that over 768 houses have been destroyed and 5,869 partially damaged while 80,409 people were temporarily displaced to 361 safe locations. More than half the displaced are located in Rathnapura district, where more rain is forecast today.

In recent weeks, over half a million people in 15 districts of the country’s south and central regions have been affected by abnormally heavy monsoon rains.

The flooding is believed to be the worst since May 2003, when a similarly powerful monsoon from the southwest destroyed 10,000 homes and killed 250 people, according to IOM.

“When the rain has eased on Sunday and Monday, rescue workers used the break in the weather to deliver much-needed aid to the worst-hit areas. But many villages remain inundated and cut off from basic services,” said the UN’s migration agency.

Rescue operations led by the Sri Lankan military are continuing and the DMC has already identified an urgent need for drinking water and non-food relief items, including shelter.

The Sri Lankan Government has appealed for international assistance and, according to media reports, three Indian naval ships carrying relief supplies arrived in Sri Lanka on Saturday and Sunday. China, the United States and Pakistan have also provided assistance. 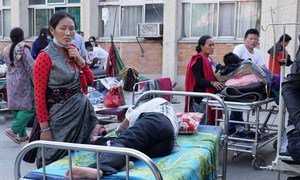 Countries in the south-east Asian sub-region have agreed to establish a dedicated funding stream to build preparedness for health emergencies in the region, which is also one of the most disaster-prone in the world, the United Nations health agency has said.