‘We are not close’ to urgently needed peace deal in Yemen, UN envoy tells Security Council

The United Nations envoy for Yemen today stressed an urgent need for a peace agreement by the warring sides in the country, but confessed that “we are not close” to such an accord due to the failure of the key parties to compromise.

“The reluctance of the key parties to embrace the concessions needed for peace, or even discuss them, remains extremely troubling,” said Ismael Ould Cheikh Ahmed, the Secretary-General’s Special Envoy for Yemen, at a Security Council briefing on the situation in the country. “Yemenis are paying a price for their needless delay.”

The envoy updated the Council on his recent efforts to broker an agreement that would avert a possible attack by the pro-Government forces on the critical port city of Hodeidah, controlled by the rebel Houthis.

Mr. Ould Cheikh Ahmed warned that the spread of fighting to the city would lead to a devastating loss of civilian life and infrastructure, and threaten the flow of food and medical supplies through the port and bring further suffering to the Yemeni people.

“So far, we managed to avert military action in Al Hodeidah,” he said, but expressed regret that the Ansarallah – General People’s Congress delegation in the capital, Sana’a, did not meet him to discuss the framework for such an agreement.

“I very much regret to inform this Council that the call for peace from Yemeni women and civil society and the international community is still falling on deaf ears,” he said.

He said he has proposed an agreement which avoid military clashes in Hodeida that should be negotiated in parallel with an agreement to ensure the resumption of salary payments nationally to all civil servants.

“An agreement on Hodeida and salaries should be just a first step towards a national cessation of hostilities and renewed discussion of a comprehensive agreement. Yet even serious negotiations of these first steps have been slow to start,” he said.

The envoy said that pro-Government forces are attempting to make progress on the western coastline of Taiz governorate – from Al-Dhubab and Al-Mokha towards Al-Hodeidah port and inland towards Taiz city.

An assessment mission carried out by humanitarian agencies in early April found that Al-Dhubab was largely empty due to widespread destruction of infrastructure and contamination by unexploded ordnance and landmines. In Al-Mokha, an estimated 40 per cent of houses and infrastructure have been damaged by the fighting.

Violence has also continued in Hajjah governorate and the border area between Yemen and Saudi Arabia.

The persistent military action is leading to an increased militarization of the Yemeni population, extensive proliferation of weapons, and widespread use of deadly landmines, the envoy warned.

On the humanitarian front, he said seven million Yemenis are at risk of famine, and half of Yemen’s population lacks access to clean water, sanitation and hygiene services. The latest outbreak of cholera has led to more than 500 deaths and over 60,000 suspected cases in 19 governorates.

Less than 45 per cent of medical facilities are functioning and medicines for diabetes, hypertension, cancer and other chronic diseases are in short supply.

“I urge the Council to strongly convey to the parties that they need to engage immediately with the United Nations to agree on steps to avoid further bloodshed, to halt the slide towards famine and to re-commit to a peaceful end to the war,” he said.

Situation in Yemen a result of international community’s inaction

Also speaking at the Council meeting today was Emergency Relief Coordinator and Under-Secretary-General for Humanitarian Affairs Stephen O’Brien, who said that the people of Yemen are being subjected to deprivation, disease and death as the world watches. 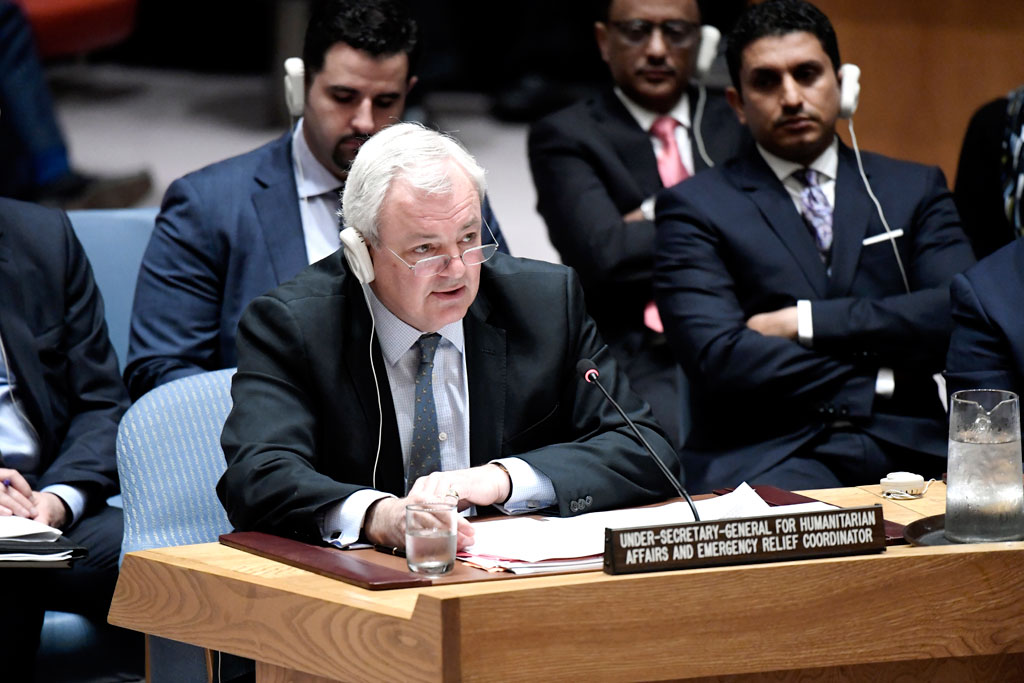 He stressed that “this is not an unforeseen or coincidental result of forces beyond our control” but rather it is a direct consequence of actions of the parties and supporters of the conflict and “sadly, a result of inaction – whether due to inability or indifference – by the international community.”

In just the last month, twice as many people were suffering from suspected cholera cases compared to those in the last six months combined. According to estimates, 150,000 cases are projected for the next six months, in addition to the broadly 60,000 current suspected cases since late April, with 500 associated deaths.

The UN and partners urgently scaled up assistance, quadrupling the number of diarrhoea treatment centres in the last month and established 136 oral rehydration corners, he said, also noting that synchronised efforts in water, sanitation and health are in place to ensure a comprehensive and holistic response, including a nationwide awareness campaign.

On Hudaydah Port, Mr. O’Brien said it is a lifeline for Yemen, being the primary point of entry for commercial and humanitarian imports into the country, which historically is 80 to 90 per cent dependent on imported food staples.

“It is also the only port in Yemen that can handle fuel, and bulk and containerized cargo at scale,” he said, appealing to Member States to ensure that all efforts are made to keep the port open and operating.

“An attack on Hudaydah is not in the interest of any party, as it will directly and irrevocably drive the Yemeni population further into starvation and famine,” he said.

Yemen: UN envoy raises concern over attack on his convoy during visit to Sana’a

The United Nations envoy for conflict-torn Yemen today expressed deep concern over the attack on his convoy while traveling from the airport to the UN compound on Monday.