UNICEF/ Logan
Veronique and some of her children who spent 6 months hiding in the bush in Bohong after violence broke out in Central African Republic.
30 May 2017

United Nations agencies are seeking to rally support for the people fleeing escalating violence in the Central African Republic (CAR), while the Organization's human rights office has called for the establishment of a strong justice system in the country.

Since fighting flared in May between rebels, more than 68,000 people have fled their homes within CAR, while more than 20,000 have sought refuge in the Democratic Republic of the Congo (DRC), according to the Office of the UN High Commissioner for Refugees (UNHCR), or the UN refugee agency.

“More funds are urgently needed to aid more than 88,000 people who have been forced to flee an upsurge in violence,” said UNHCR spokesperson Babar Baloch at today's press briefing in Geneva.

Significant rebel activity on towns along the DRC border as well as rumours of possible attacks are pushing people to flee in the Haute Kotto and Mbomou prefectures inside CAR, he noted.

UNHCR is calling for urgent support to its funding appeal of $209.2 million for the CAR situation, which is only 6 per cent funded.

For its part, the International Organization for Migration (IOM), or the UN migration agency, has tracked more than 19,000 displaced people in the nation's sub-prefecture of Bangassou in Mbomou Prefecture, which is situated at the border with the DRC. More than 13,000 of those displaced are children.

“More than 80 per cent of the displaced persons are living with host communities and not in camps,” said Yoko Fujimura, IOM's expert on displacement tracking. “Host families are sharing the little that they have with displaced people and therefore should also be supported to avoid tensions over limited resources,” she added.

As of May 2017, there were more than 500,000 internally displaced persons nationwide, a figure that had not been reached since August 2014.

Meanwhile, the Office of the UN High Commissioner for Human Rights (OHCHR) has released a report that maps 13 years of violence and impunity in the CAR.

Mass killings and other serious human rights violations have been documented in the report covering the multiple conflicts in the Central African Republic between 2003 and 2015.

Many of the violations may amount to war crimes and crimes against humanity, the mapping report states, as it sets out a strategy to fight pervasive impunity in the country.

“The history of the country has been marked by deep-rooted poverty, ethnic tensions, pervasive political instability, corruption and nepotism that led to a succession of armed conflicts,” the mapping report states. “After gaining independence, the Central African Republic was subjected to a succession of authoritarian regimes that committed, condoned and were unable to prevent serious violations and abuses.”

Regional instability and internal conflicts in neighbouring countries have fuelled the volatile conditions in the country, particularly through the flow of arms and rebel groups across its porous borders, the report adds.

“The mapping report on the Central African Republic lays bare the staggering suffering of the people of this mineral-rich country which is among the poorest in the world,” UN High Commissioner for Human Rights Zeid Ra'ad Al Hussein said.

“In documenting the violations and abuses of the past, we hope to galvanize national and international efforts to protect and bring justice to the victims of these crimes,” said Parfait Onanga-Anyanga, the UN Special Representative for the CAR and head of the UN Multidimensional Integrated Stabilization Mission in the Central African Republic (MINUSCA).

The report sets out recommendations, such as having a sequenced and comprehensive approach to transitional justice, creating a prosecution strategy for the Special Criminal Court, and establishing a truth and reconciliation commission. 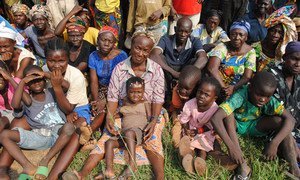 A senior United Nations official is calling for additional humanitarian aid in the Central African Republic, where nearly the entire population of the city Bria was forcibly displaced last week.