We can't change nature, but we can be prepared if we have the right information – that was the message from a major United Nations conference on risk reduction in Cancun, Mexico, which closed with a call for all countries to systematically measure losses from natural disasters.

“We can only prove progress on reducing disaster losses if we know accurately what those losses are,” Robert Glasser, the UN Secretary-General's Special Representative for Disaster Risk Reduction, said in his closing remarks.

“ If you don't measure something – transparently – it's not going to happen,” said Mr. Glasser, stressing the importance of effective monitoring.

Held every two years since the 2004 Indian Ocean tsunami to discuss disaster reduction, the 2017 Global Platform – the fifth such event to date – brought together some 6,000 Heads of State, policy makers, disaster risk managers, civil society and other participants.

This is the first international summit on disaster since the “Sendai Framework, which was adopted in 2015 in the northern Japanese city after which it was named, and consists of seven targets and four priorities for action that aim for the substantial reduction of disaster risk and losses in lives, livelihoods and health and in the economic, physical, social, cultural and environmental assets of persons, businesses, communities and countries.

The first cycle of monitoring progress on implementing the Sendai Framework is scheduled to be launched in early 2018. 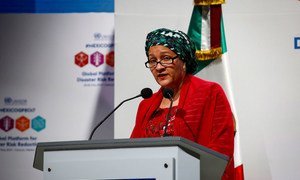 Opening a major United Nations conference on risk reduction in Cancun, Mexico, Deputy Secretary-General Amina Mohammed cautioned that the world would not reach its development goals without tackling climate change and disaster risk.