Condemning the surging violence in Tripoli, the top United Nations official in Libya called today for an immediate end to fighting in and around the capital and for rival groups to “put Libyan national interests” ahead of their own.

According to a news statement, Martin Kobler, the Special Representative of the UN Secretary-General for the North African country, is following reports of the violence with grave concern and has called for the fighting to stop and for civilians to be protected.

“Voices of reason should prevail for the benefit of the country,” he said. “Political aims must not be pursued through violence. Civilians must be protected. I remind all parties of their duty to respect the provisions of international humanitarian and international human rights law”, said Mr. Kobler, who also heads up the UN Support Mission in Libya (UNSMIL).

He went on to express full support to the Presidency Council as the “sole legitimate executive authority in Libya,” as stipulated in UN Security Council resolution 2259 (2015) and 2278 (2016). He urged all parties in Libya to engage seriously in the political process and towards national reconciliation.

For its part, the UN Security Council also condemned the escalating violence in Tripoli today. Calling on all parties in Libya to exercise restraint, the Council reiterated that there can be no military solution and urged parties to express their support for national reconciliation.

“The members of the Security Council called for perpetrators of criminal and terrorist acts across Libya to be brought to justice,” continued the statement, which also condemned the military escalation in southern Libya, including the attack at Brak al-Shati on 18 May, which reportedly resulted in the summary executions of combatants and civilians.

Welcoming the statement by Prime Minister Sarraj condemning the military escalation and launching an investigation into the attack at Brak al-Shati, the Council also noted condemnations of the attack by other Libyan political institutions.

On other concerns, the Council reiterated its grave concern at the increase in smuggling of migrants in the Mediterranean Sea off the coast of Libya, deplored the continued resulting tragedies, including on 24 May which resulted in dozens of casualties, and extended their deepest condolences to all those affected and their families. 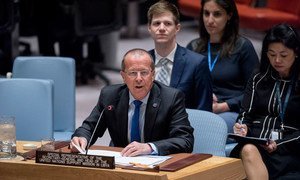 It is more important than ever to forge unity within Libya, the United Nations envoy for the country told the Security Council today, while he called on Libyan stakeholders to regain the optimism generated by the 2015 Political Agreement, which has faded and is being replaced by “frustration and disappointment.”