FAO/Christena Dowsett
Machakos District, Kenya - Kweka farmers group members display how seeds are stored between harvest and the next planting season to ensure food production will continue.
25 May 2017
Economic Development

“Informal cross-border trading, in which transactions are not compliant with local tax and other rules, accounts for a large share – between 20 and a hefty 70 per cent

– of employment in sub-Saharan Africa,” according to the UN Food and Agricultural Organization (FAO).

“Putting it on a regular footing can lift sustainable prosperity and markedly improve prospects for women,” FAO said in a new publication, Formalization of informal trade in Africa.

Informal cross-border trade, often agricultural, is the result of poor access to government offices, a lack of administrative skills and improper understanding of import and custom-tax laws.

One of the main groups that would be affected by formalization is women, who constitute the largest share of informal traders – about 70 per cent in Southern Africa and more than half in other parts, according to the report.

“Facilitating formalization is the only viable policy option for Africa's transformation agenda to realize its objectives,” said Suffyan Koroma, FAO senior economist and lead author of the report.

The publication was presented today at a conference in Kigali, Rwanda. The event is part of ongoing FAO-supported work in the country, along with UN Women and other development partners, aimed at enabling women to benefit more from agri-food chains, a project geared to allowing women small traders access useful information as well as start-up capital. 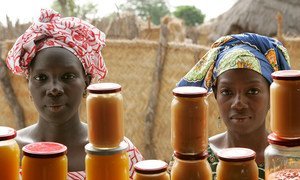 Over the last six months, global economic progress has predictably picked up, but low-level growth in some regions has tempered efforts to meet globally agreed development goals, according to a new United Nations report launched today in New York.