Yemen: UN envoy raises concern over attack on his convoy during visit to Sana’a

The United Nations envoy for conflict-torn Yemen today expressed deep concern over the attack on his convoy while traveling from the airport to the UN compound on Monday.

“It is the responsibility of the local authorities to ensure the safety of all UN personnel in the country and urged them to investigate the incident, hold those responsible to account, and prevent any such incidents in the future,” said Ismail Ould Cheikh Ahmed, the UN Special Envoy to Yemen, according to a note issued by the Office of the Spokesperson for the UN Secretary-General.

Concluding a three-day visit to the country’s capital, Sana’a, the Special Envoy indicated that the incident increased his determination to continue with his efforts to find a negotiated political settlement that serves the best interests of the Yemeni people.

Prior to Sana’a, he visited Saudi Arabia and Qatar, where he met with government officials as part of his efforts to find a political solution to the conflict in Yemen.

In Sana’a, he met with political leaders from Ansar’Allah and the General People’s Congress and Representatives of other political parties, the note said, adding that the talks focused on possible agreements which would prevent the spread of military activities to Hudeidah and practical ways to ensure the resumption of salaries to all Yemeni civil servants nationwide.

Mr. Ould Cheikh Ahmed also met with members of the Yemeni Women’s Pact for Peace and Security and representatives of civil society organizations to discuss current political challenges and security concerns in addition to the economic crisis and recent outbreak of cholera, the note said.

In a meeting with Yemeni youth, the Special Envoy discussed mechanisms for greater youth contribution to international efforts to reach a peaceful resolution to the conflict, in addition to possible solutions to reopen Sana’a International Airport and prevent further deterioration of the economic and humanitarian situation.

He also met with senior World Bank officials in order to support the World Bank-UN collaboration to address the growing food insecurity and economic crisis in Yemen, the note added. 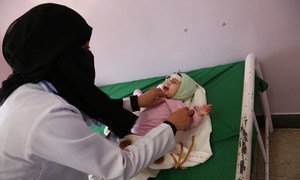 With more than 100,000 people in Yemen believed to be at risk for cholera, the top United Nations humanitarian official in the country is appealing to Governments for urgent financial and political support