A fact-finding mission in Syria has found evidence of sulfur mustard in samples taken from an alleged attack on 16 September 2016, while samples from a 4 April incident have revealed exposure to sarin or a sarin-like substance, the United Nations disarmament chief told the Security Council today.

“We must not allow ourselves to become inured to the ongoing allegations of the use of chemical weapons. This is an issue about which the United Nations cannot be neutral,” Izumi Nakamitsu, High Representative for Disarmament Affairs, said in her first briefing to the Security Council since her appointment.

Citing initial findings from the fact-finding mission by the Organisation for the Prohibition of Chemical Weapons (OPCW), she emphasized that the use of chemical weapons by any actor – whether Government forces, terrorist factions or armed opposition groups – could never be justified, regardless of provocation or circumstance.

“Their re-emergence is indefensible and cannot be viewed as anything other than a violation of the most basic international law and a serious deviation from the internationally agreed broader path towards the goal of a world free of chemical weapons,” she said. “As such, this is not an issue to be politicized.”

She said OPCW has deployed a fact-finding mission on two occasions following allegations of chemical weapons use on that date in the area of Um Hosh, in the Aleppo countryside. Members of the mission have conducted interviews, collected testimonies and reviewed documents, as well as information provided by the Syrian authorities, she added.

While the prevailing security situation has prevented the team from visiting the site of the alleged incident, she continued, it has been able to review analyses of blood samples from two female casualties reported to have been involved in the attack.

They were found to have suffered exposure to sulfur mustard, as was a mortar handed over to the team by the Russian Federation’s Chemical, Biological, Nuclear and Radiological Team.

Regarding the reported incident in Khan Shaykhoun on 4 April – she said that, after a preliminary assessment, a fact-finding mission was deployed to a neighbouring country, where it conducted interviews and witnessed the collection of biomedical samples from the alleged incident. The analysis of samples showed exposure to sarin or a sarin-like substance.

It has also received biological-environmental samples from dead animals reported to have been close to the suspected impact point, attended the autopsies of three alleged victims, and witnessed the extraction of biomedical samples from their bodies.

She, however, emphasized that all materials and information collected were currently being analyzed, thus not final. 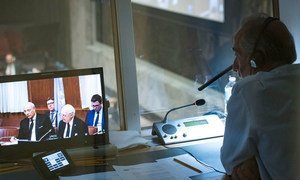 Despite the “promising” steps in Syria that followed diplomatic talks in the Kazak capital, Astana – a nationwide ceasefire announced last December, and the de-escalation zones created inside Syria to deepen that effort – a United Nations envoy today warned of ongoing hostilities between the Government and armed opposition groups in several areas, such as Hama, Homs, and Damascus.