As world leaders and civil society representatives gather today in Cancun, Mexico, for a biennial United Nations forum on preventing and mitigating disaster impacts, the UN today launched an updated plan to increase the number of cities and towns with the capacity to reduce their disaster losses by 2020.

It is a major boost to the goal of having more strategies in place at local level for reducing disaster losses from climate change and other risk drivers. This is a key area of focus this week at the UN’s biennial Global Platform for Disaster Risk Reduction where the Scorecard was launched today. Plans are in place to have 200 cities using it by the end of the year.

“National governments have the primary responsibility of implementing the Sendai Framework working with many stakeholders, and the Scorecard is a valuable support to this work at the local level,” pointed out UNISDR chief Robert Glasser.

UNISDR noted that the revision was undertaken by its private sector partners, American firms AECOM and IBM, with the support of the European Commission and USAID. It follows a pilot project undertaken by 35 cities that are members of the UNISDR Making Cities Resilient Campaign which comprises over 3,500 cities worldwide.

Ms. Kathy Oldham, Head of Civil Contingencies and Resilience Unit, Association of Greater Manchester Authorities, of the United Kingdom, commented that: “using the Disaster Resilience Scorecard gave us the opportunity to broaden and deepen our understanding of resilience, bringing together partners from across the city region in conversations to explore the different issues the Scorecard highlights.”

Losses due to disasters from natural and man-made hazards including floods, storms and the impacts of climate change are mounting and on average cost governments over $300 billion globally each year.

The Scorecard provides a set of assessments that cover the policy and planning, engineering, organisational, financial, social and environmental aspects of disaster resilience. Designed to be led by local government authorities, the Scorecard aims to assist in monitoring and reviewing progress in the implementation of the Sendai Framework.

The Scorecard is a free self-assessment tool to be used by cities or local government agencies. 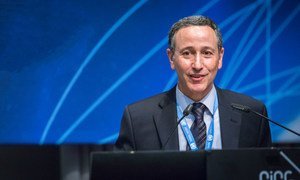 According to the United Nations Office for Disaster Risk Reduction (UNISDR), disaster risk reduction is an integral part of social and economic development, and is essential if development is to be sustainable for the future. In 2015, for example, there were nearly 350 reported disasters, over 22,000 deaths, 98.6 million people affected, and $66.5 billion in economic damage.