UNICEF/Brown
This 9-year-old, the son of a pastor at the village church, was injured by unexploded ordnance two years ago in Ann Ka Law village, Kayin state in Myanmar.
23 May 2017

The benefits of Myanmar's economic growth, reform and reconciliation efforts have not yet reached children in the country's remote, conflict-affected areas, leaving an estimated 2.2 million children in need of better humanitarian assistance, a United Nations report has revealed.

“Myanmar faces a real challenge in ensuring that children everywhere – and not just in urban areas – gain from the country's rapid development,” said Justin Forsyth, the Deputy Executive Director of the UN Children's Fund (UNICEF).

“There is a risk that many children and their families are excluded. This is especially the case for poorer children living in remote areas or trapped in situations of tension and conflict,” he added.

The report stressed that investing some of the financial dividends earned from Myanmar's recent economic growth, in services that will benefit children and youth, can help steer the country towards a more prosperous and stable future.

The report notes that social and economic measures undertaken by the Government since 2010 are beginning to strengthen the systems that boost children's health, education and protection.

VIDEO: UNICEF report calls for improved humanitarian access to an estimated 2.2 million children affected by violence in Myanmar, and for an end to child rights violations.

A draft child law, and increased public funding for immunization programmes and education have demonstrated a stronger commitment to furthering children's rights in the country, UNICEF said.

However, the agency pointed out that life for many children in Myanmar remains a struggle: up to 150 children under the age of five die each day, while nearly 30 per cent suffer from moderate or severe malnutrition. More than half of all children live below the poverty line.

In Rakhine state, 120,000 internally displaced people – including many ethnic Rohingyas – live in camps as a result of inter-communal conflict that erupted in 2012. Violence surged again last year following attacks on border guard posts.

In remote Kachin, Shan and Kayin states and other border areas, recurrent clashes between the Myanmar military and Ethnic Armed Organisations continue to drive families from their homes. Civilians find themselves at risk from poverty, statelessness, and trafficking, while having only limited access to essential health and education services.

The report calls for improved humanitarian access to an estimated 2.2 million children affected by violence, and for an end to rights violations including the use of children as soldiers.

The report was released ahead of the second national Peace Conference in Myanmar on May 24, which UNICEF says is an opportunity to commit to stronger protection of children from conflict. 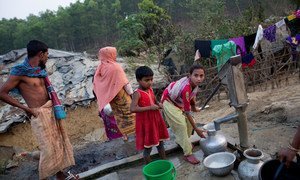 The tens of thousands of members of Myanmar’s Rohingya community who fled inter-communal violence in north of the country and sought refuge in Bangladesh remain highly vulnerable and risk being “re-victimized even in exile” unless urgent action is taken, a senior United Nations refugee protection official has warned.