UN Photo/Eskinder Debebe (file)
A wide view of the Security Council ministerial-level meeting on the nuclear weapon and ballistic missile programmes of the Democratic People’s Republic of Korea (DPRK).
22 May 2017

Strongly condemning yesterday’s ballistic missile launch conducted by the Democratic People’s Republic of Korea (DPRK), the United Nations Security Council vowed to “fully and comprehensively implement all measures” imposed on the country and strongly urged all other UN Member States to do the same.

In a press statement, Council members expressed their utmost concern over the DPRK’s “highly destabilising behaviour and flagrant and provocative defiance” of the Council by conducting this ballistic missile launch in violation of its international obligations under the body’s relevant resolutions, dating from 2006.

The body dealing with the Council’s sanctions regime against DPRK, known as the ‘1718 Committee’ after the Council resolution that established it, was urged to redouble its efforts to improve global implementation of all measures, including by implementing the relevant feasible recommendations of the Panel of Experts as soon as possible.

Stressing that the DPRK’s illegal ballistic missile activities are significantly contributing to its development of nuclear weapons delivery systems and are greatly increasing tension in the region and beyond, the Council further regretted that the country is diverting resources to the pursuit of ballistic missiles and nuclear weapons while its own citizens “have great unmet needs.”

Further to the statement, the Council emphasized the vital importance of the DPRK’s immediately showing sincere commitment to denuclearization through concrete action and stressed the importance of working to reduce tensions in the Korean Peninsula and beyond. To that end, the Security Council demanded the DPRK conduct no further nuclear and ballistic missile tests.

Reiterating the importance of maintaining peace and stability on the Korean Peninsula and in North-East Asia at large, the Council members expressed their commitment to “a peaceful, diplomatic and political solution to the situation,” and welcomed efforts by Council members, as well as other States, to facilitate a peaceful and comprehensive solution through dialogue. 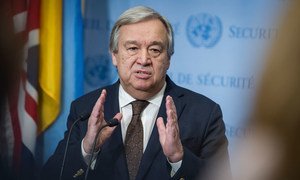 United Nations Secretary-General António Guterres today urged Pyongyang to return to the path of denuclearization saying the latest ballistic missile launch by the Democratic People’s Republic of Korea (DPRK) is a threat to peace and security in the region.