22 May 2017
In Yemen, Bahá’ís are under pressure to recant their faith, according to a United Nations rights expert, noting that in April, the Public Prosecutor reportedly summoned by phone at least 30 members of the community to appear in court, and de facto authorities in Sana’a ordered the arrest of at least 25 more.

“The recent escalation in the persistent pattern of persecution of the Bahá’í community in Sana’a mirrors the persecution suffered by the Bahá’ís living in Iran,” said the UN Special Rapporteur on freedom of religion or belief, Ahmed Shaheed. “Many Yemeni Bahá’í families in Sana’a have left their homes and live in constant fear.”

Mr. Shaheed noted that the persistent harassment of Bahá’ís amounted to religious persecution in Yemen, saying “It is unacceptable for anyone, including persons belonging to religious minorities, to be targeted or discriminated based on religion or belief.”

In addition, two Yemeni Bahá’ís, Walid Ayyash and Mahmood Humaid, were reportedly arrested by political security officers at a check point near the city border of Hudiedah. Their whereabouts are unknown since their arrests.

“The new wave of court summons and arrest orders appears to be an act of intimidation pressuring the Yemeni Bahá’ís to recant their faith,” the Special Rapporteur said. “The Yemeni authorities, including the de facto authorities in Sana’a, have failed to respond to the call made by my predecessor and other UN independent experts last year,” he added, referring to a call made in October 2016.

“The Houthi de facto authorities in Sana’a must stop summoning or arresting the Bahá’ís and immediately release all Bahá’ís arbitrarily detained,” he stressed. “They must also start an inquiry into the disappearances of Mr. Ayyash and Mr. Humaid, and provide details of the investigation.”

The expert furthermore recalled the case of Hamid Kamali Bin Haydara, arrested in 2013, and remains incarcerated in the National Security Prison for ‘compromising the independence of the Republic of Yemen,’ including spreading the Bahá’í faith in the country. His trial has been postponed on numerous occasions, and is now scheduled for 1 August. The expert also urged for the release of two other Bahá’ís, Kaiwan Mohamed Ali Qadri and Pazhohesh Sana’i who remain detained since their arrests.

The Special Rapporteur reminded the Yemen Government and the de facto authorities in Sana’a that the right to freedom of conscience, thought, religion or belief is a non-derogable right under any circumstance, adding that persons had the right not to be arbitrarily detained for exercising religious freedom or for belonging to a religious minority. 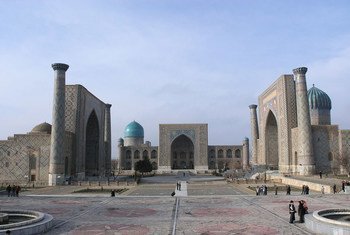 11 May 2017
The United Nations human rights chief today announced that the Central Asian branch of his Office will extend its coverage to Uzbekistan now that an agreement is in place, highlighting that the country is “at a crossroads.”