<a href=http://bit.ly/2pWiOlj>Meridith Kohut/IRIN</a>
Shoppers wait in line for five hours to buy a ration of bread from a small bakery in Cumaná, Venezuela.
19 May 2017

Amid rising violence in Venezuela, the United Nations human rights chief has expressed regret that the Latin American country’s opposition leader was allegedly blocked from leaving the country for New York, where they were planning to meet.

UN High Commissioner for Human Rights Zeid Ra’ad Al Hussein has said on Twitter that he regrets that Henrique Capriles was unable to travel and hoped that the incident is not a reprisal linked to the planned meeting with him in New York today, Mr. Zeid’s spokesperson, Rupert Colville, told reporters in Geneva.

The spokesperson said that the High Commissioner would go ahead with a meeting this afternoon in New York with Mr. Capriles’ lawyer who would share a report prepared by Mr. Capriles.

“We find the rising tensions in Venezuela very alarming, and incidents like that involving Mr. Capriles yesterday are unlikely to help reduce tensions,” the spokesperson said.

The Office of the UN High Commissioner for Human Rights (OHCHR) also regrets the continued loss of lives during the political unrest, he said. According to the latest figure, 42 deaths were confirmed in the context of the protests.

He expressed concerns about allegations of excessive use of force by security forces, reports of violence by armed groups, as well as reports that people detained during the protests are being brought before military tribunals, not civilian courts. 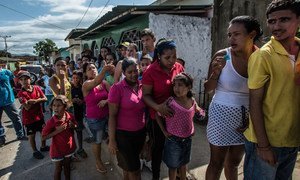 Venezuela: UN urges all efforts be made to lower tensions in Venezuela

The United Nations today expressed concern about the latest developments in Venezuela, calling for on the Government and the opposition to address the country’s challenges for the benefit of the people.