More than 30,000 Somali refugees have apparently returned to Somalia from Yemen, the United Nations refugee agency said, and an increasing number are seeking aid to return home.

Babar Baloch, spokesperson at the Office of the UN High Commissioner for Refugees (UNHCR), today told reporters at the UN's Geneva Office that Somali refugees are approaching the agency for assistance to return “citing safety and security concerns and limited access to services in Yemen.”

The UN agency can assist up to 10,000 Somalis who voluntarily want to return to their home country. Their assistance would include documentation, travel and transportation aid, as well as financial support in Yemen to facilitate the journey.

“Most refugees opt to return to Mogadishu, in the anticipation that assistance and services will be more accessible and available,” Mr. Baloch said.

Among the people who want to return is Barei Ibrahim and her 10 children. Ms. Ibrahim has been living in Yemen for 26 years, after war drove her from Somalia in the early nineties.

“I don't have anything here,” she told UNHCR from Yemen's only refugee camp, Kharaz, in the Lahj governorate. “I don't have a job or a future and we are facing difficulties. We are begging to get by and are living in sorrow and grief.”

Some 30,600 Somalis have reportedly already returned to Somalia from Yemen since the beginning of the current war, according to UN figures.

“The conditions facing the almost 280,000 refugees in-country are worsening and their needs are growing by the day,” UNHCR said. About 91 per cent of those refugees are Somalis, many who fled to Yemen years ago.

Yemen has traditionally accepted those in need of international protection, and is the only country in the Arabian Peninsula signatory to the Refugee Convention and the Protocol. However, the ongoing war has limited the capacities to provide adequate assistance and protection to refugees.

The UN agency is working to support those refugees living in Yemen, providing protection and services that include legal assistance, education and access to health and psycho-social services.

♦ Receive daily updates directly in your inbox - Subscribe here to a topic.
♦ Download the UN News app for your iOS or Android devices.
Somalia|Yemen 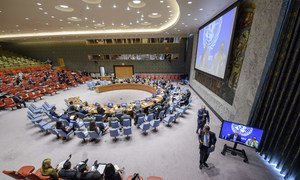 The humanitarian crisis in Somalia is worsening, a senior United Nations official told the Security Council, calling for more than $800 million in aid to offset the impact of a severe drought in a country that is already battling insecurity and poverty.