UNHCR/Andreas Kirchof
Two refugee children who have arrived in Democratic Republic of the Congo with a group of more than 400 other refugees from the region around Yei in South Sudan.
19 May 2017

A United Nations report has documented human rights violations and abuses against civilians that may amount to war crimes or crimes against humanity, in what used to be a peaceful multi-ethnic town in South Sudan.

“The conflict in Yei, in particular, highlights the startling level of impunity in South Sudan, which has fed successive cycles of violence across the country,” said the report, which contains the findings of an in-depth investigation into violations committed in and around the Central Equatoria town, 150 kilometres southwest of the capital, Juba, between July 2016 and January 2017.

The report by the Human Rights Division of the UN Mission in South Sudan (UNMISS) and the Office of the UN High Commissioner for Human Rights (OHCHR) exposes violations and abuses by both sides of the conflict, based on ethnicity or their presumed association with the other side, including 114 killings by pro-Government forces.

The extent of the abuses by armed opposition groups remains unclear due to lack of access to areas where these groups are active. The report finds that these violations and abuses may amount to war crimes or crimes against humanity and that they warrant further investigation.

Yei had been a largely peaceful town, with between 200,000 and 300,000 residents of many different ethnicities, until July 2016, when violence erupted between Government and opposition forces, which led to the departure of opposition leader Riek Machar into the Democratic Republic of the Congo.

As Government forces chased him, fighting simultaneously broke out along the route, particularly in Yei, fuelling strong divisions along ethnic lines and resulted in targeted killings, arrests, rapes and mass civilian displacement of more than half of the population of the town.

Satellite imagery shows that there was widespread burning of homes and businesses, resulting in the forcible displacement of tens of thousands of civilians. 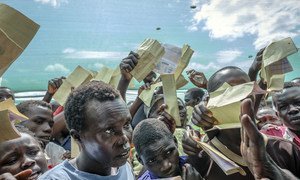