UN Photo/Catianne Tijerina
MINUSCA, the UN Multidimensional Integrated Stabilization Mission in the Central African Republic (CAR), on patrol in the capital Bangui.
13 May 2017

The United Nations peacekeeping force in the Central African Republic is sending reinforcements to the south-eastern town of Bangassou, where an armed group opened fire on civilians overnight killing an undisclosed number and at least one UN peacekeeper.

“The armed elements continue to systematically and deliberately attack the MINUSCA base with heavy weaponry to impede the peacekeepers from doing their extremely vital task of protecting the civilian population and to divert them from their primary vocation of saving lives,” the UN Multidimensional Integrated Stabilization Mission in the country, known by the French acronym MINUSCA, said in a statement.

The Mission said that members of a wide coalition, including anti-Balaka elements attacked civilian populations overnight, targeting in particular Muslims, in the Tokoyo neighborhood of Bangassou.

“Despite heavy fire against MINUSCA's field office, peacekeepers attempted to respond to the attack in Tokoyo to protect civilians. In the firefight, which continued into the morning of 13 May, one peacekeeper of the Moroccan contingent died from gunshot injuries,” the Mission said.

According to preliminary information, displaced civilians have fled to the mosque, the catholic church and a hospital.

“At this time it is difficult to ascertain the humanitarian situation in Bangassou. However credible sources have confirmed an undetermined number of civilian casualties, MINUSCA said.

The Special Representative of the Secretary-General and Head of MINUSCA Parfait Onanga-Anyanga vigorously condemned the attack, adding that “MINUSCA will do everything in its power together with the legitimate Central African authorities to arrest the perpetrators of these horrible acts.”

He said the international community will be “relentless” in apprehending the perpetrators of these crimes and all their commanders, including some instigators who may be sponsoring these attacks from Bangui.

“Our actions will be relentless. The blood of peacekeepers and the blood of innocent Central Africans will not fall in vain in this country,” he added.

The attack came just hours after the UN held a memorial ceremony to honour five peacekeepers killed on 8 May in a nearby village of Yogofongo. People connected with the anti-Balaka group are also suspected in the attack.

Special Representative Onanga-Anyanga was joined by the UN Under-Secretary-General for Peacekeeping Operations, Jean-Pierre Lacroix, and other senior UN officials, who are on a special visit to the country. Earlier in the day, they visited the 10 Cambodian and Moroccan peacekeepers injured in the attack and wished them a speedy recovery. 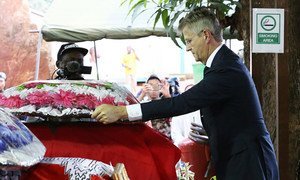 The United Nations Multidimensional Integrated Stabilization Mission in the Central African Republic (MINUSCA) held a memorial ceremony today in honour of five peacekeepers who lost their lives after their convoy was attacked in the south-eastern part of the country earlier this week.