Time now to maximize on the opportunities offered in Haiti, highlights head of UN advisory group

Following their recent visit to Haiti, a United Nations advisory group on the island nation called on the international community to work closely with the Government and capitalize on the opportunities that have presented there.

“Haiti now has a Government and a President that has been elected – a Government that has been put in place and which seems to be functioning,” Marc-André Blanchard, Chair of the Economic and Social Council (ECOSOC) Ad Hoc Advisory Group on Haiti and the Permanent Representative of Canada to the UN, told a press conference at the UN Headquarters in New York.

“They have priorities that are very interesting and aligned with the 2030 Agenda for Sustainable Development, so there is an opportunity for action,” he added.

He further highlighted that the focus in the impoverished country, hit hard by a number of natural disasters, is moving from humanitarian assistance towards development and that the international community should collaborate with the Government to ensure that the priorities set by the countries can be implemented.

The Advisory Group, mandated by the UN Economic and Social Council (ECOSOC) to closely follow and provide advice on the long-term development strategy of Haiti to promote socioeconomic recovery, reconstruction and stability, conducted a mission to the country from 8 to 10 May during which it met with a broad range of stakeholders, including Government officials, parliamentarians, civil society and development agencies on the ground.

Further at the press conference, Mr. Blanchard recalled the contributions made by the UN mission in the country, known by its French acronym, MINUSTAH, and noted that while it was deployed to the island at a difficult time, it “was actually able to achieve a lot.”

However, he added that some security concerns, issues with institutions and corruption remained and underscored that the transition of MINUSTAH to a new mission, the United Nations Mission for Justice Support in Haiti (MINUJUSTH), with the added focus on the rule of law, governance and institutions “institutions is the right one for the future involvement of the UN.” 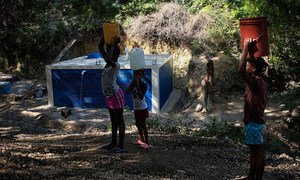 Historically, the people in the Madan Mak and Loncy areas of the Lascahobas Commune have always had serious problems with access to safe drinking water.