ESCAP
Shamshad Akhtar, the Executive Secretary of ESCAP, delivering her policy statement at the 71st session of the Commission.

Notwithstanding the challenges faced by countries in Asia and Pacific, the region has witnessed economic and social achievements beyond expectations over the past 70 years, according to the head of the United Nations body assisting with development efforts.

As Executive Secretary of the UN Economic and Social Commission for Asia and the Pacific (ESCAP), Shamshad Akhtar leads an entity with a geographical scope that stretches from Turkey in the west to the Pacific island nation of Kiribati in the east, and from Russia in the north to New Zealand in the south, and covers a region that is home to 4.1 billion people, or two-thirds of the world’s population.

Founded in 1947, as the then Economic Commission for Asia and the Far-East, to assist the region’s countries with economic reconstruction in the devastating aftermath of the Second World War, the Commission’s geographical scope and mandate were expanded in the 1970s to reflect changes on the ground.

In addition, member States will deliberate on regional cooperation for sustainable energy, an issue vital in a region where millions suffer from severe energy insecurity and lack of access. Also on the agenda are exchanges on infrastructure development in least developed, landlocked developing and Pacific island developing countries, applications of space technology for environment and resilience against water-related disasters.

UN News spoke to Ms. Akhtar, a Pakistani national and seasoned economist, about development efforts in the region, including ongoing challenges, as well as the work of ESCAP and what is expected during the upcoming session. 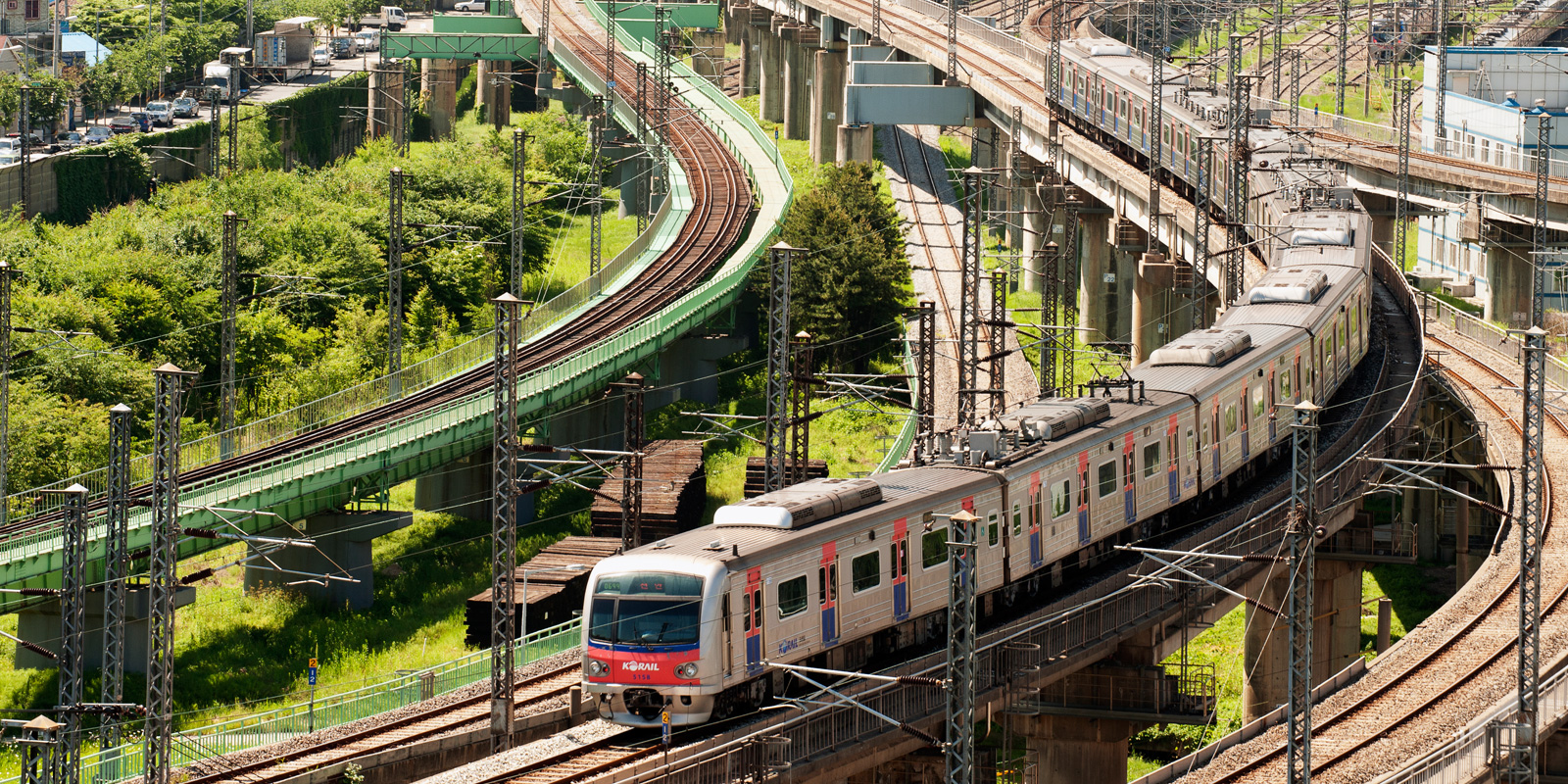 A train snakes its way through Seoul, Republic of Korea. Photo: Kibae Park 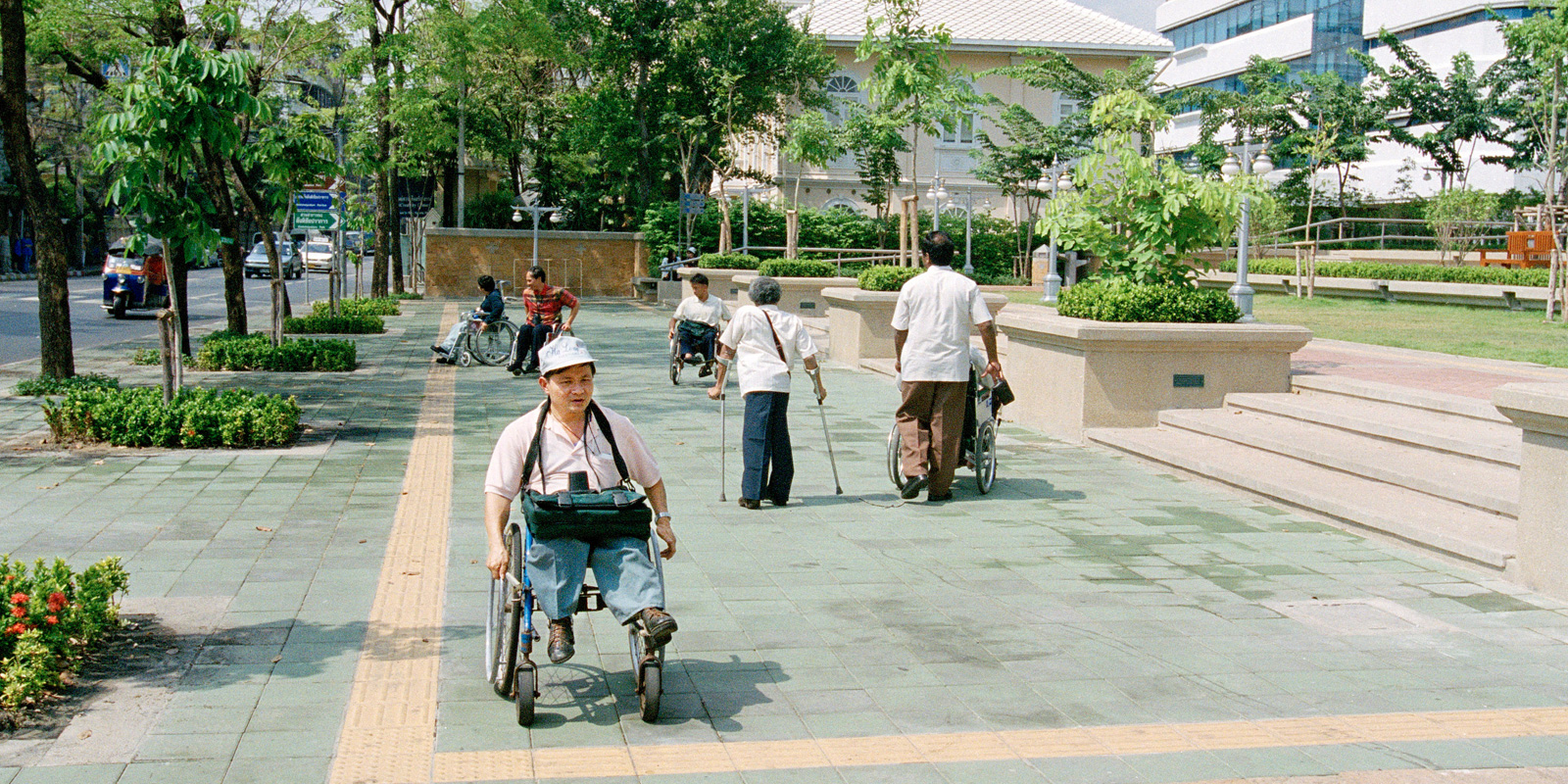 A park in Bangkok, Thailand, where accessibility and assistive features such as detectable guides and warnings have been installed. Photo: UN Photo/Eskinder Debebe 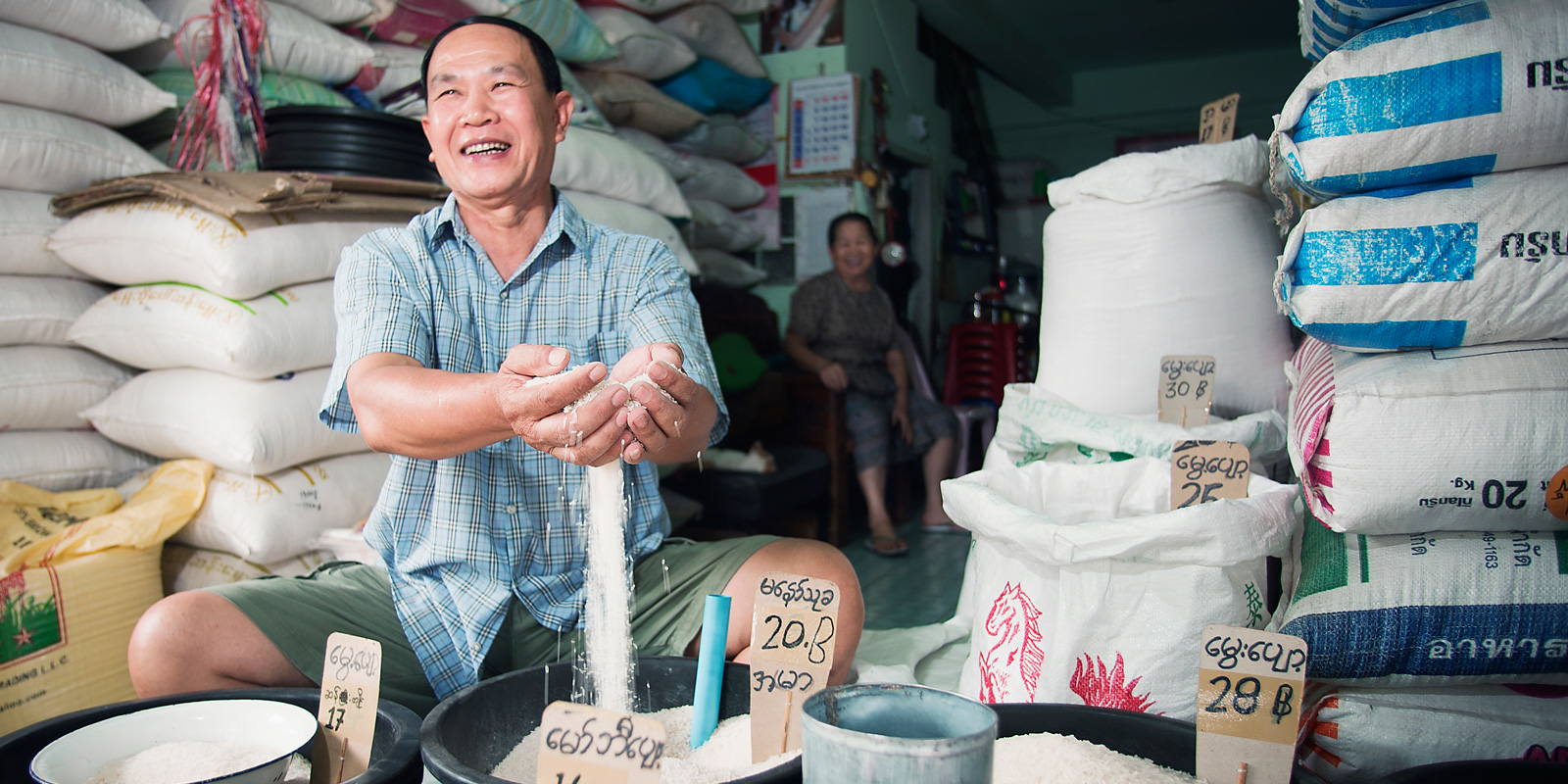 A shopkeeper at a local grain market in Tachileik, Myanmar. Photo: Kibae Park 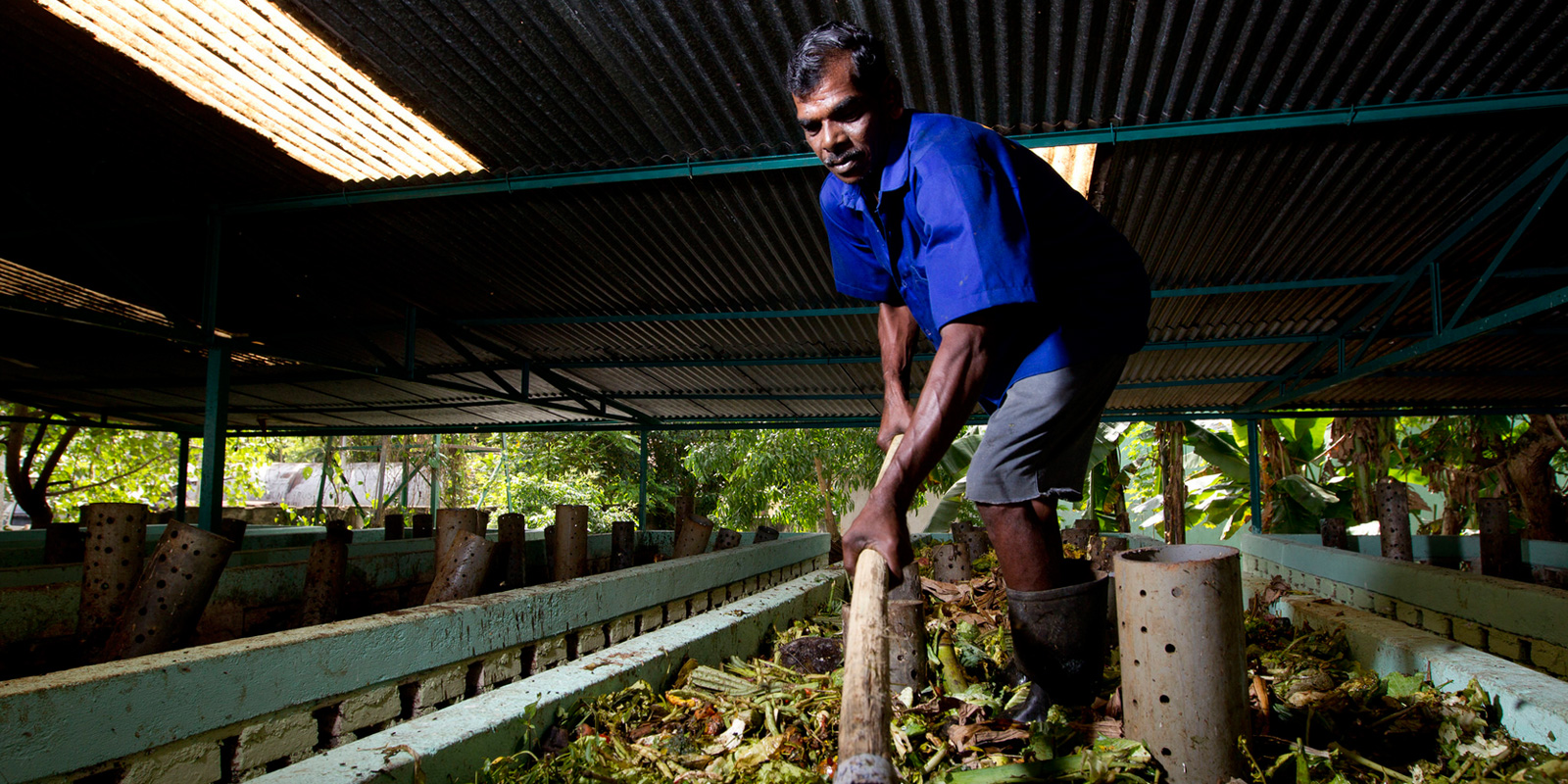 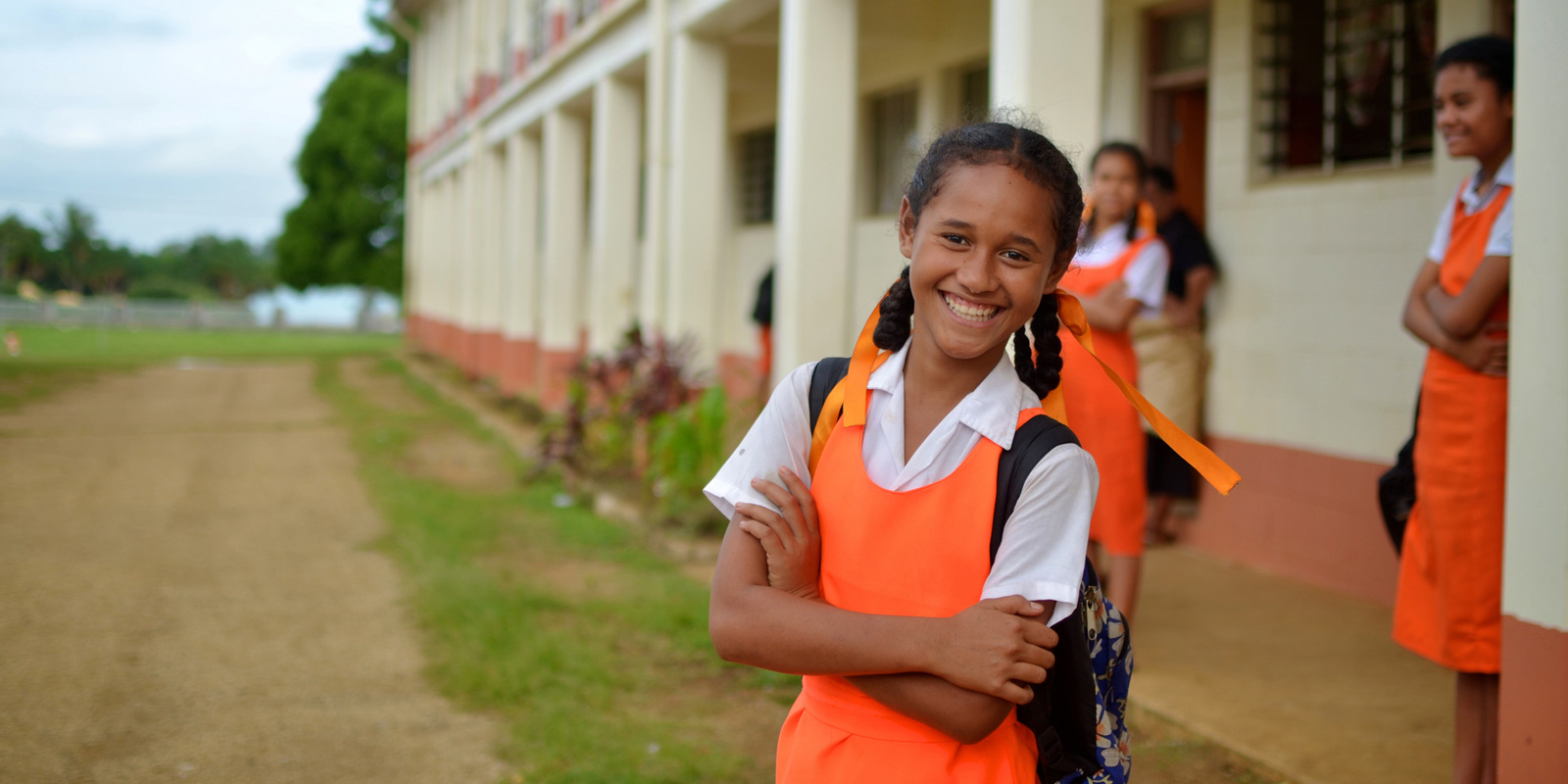 A student at the Tailulu College in Nukua'lofa, Tonga, where broadband internet connectivity has been installed, transforming the way students access information. Photo: Tom Perry/World Bank

UN News: Can you tell us about the current socio-economic development snapshot of the region and how this has changed over the past 70 years?

Shamshad Akhtar:  Asia-Pacific is a very vibrant and dynamic region. It has come a long way since ESCAP was created in 1947 to assist countries emerging from the devastation of World War II.

I have to say that the region has witnessed economic and social achievements beyond expectations – it is the region that led the drive for poverty reduction and is today known for being the driver of the global economic recovery. Asia-Pacific is the region that today accounts for 40 per cent of global trade.

UN News: That said, Asia and the Pacific also has its fair share of challenges. Can you elaborate?

There are about 400 million people still poor in the region. This number rises to 900 million if measured using the multi-dimensional poverty index. So reducing poverty is a major issue

Secondly, the region has been at the frontier of export-led development. Now it is time for it to move towards domestic-driven growth. Given its potential and the value-added relationships that it has developed, Asia-Pacific has the potential to further stimulate the regional demand.

Another challenge is poverty. There are about 400 million people still poor in the region. This number rises to 900 million if measured using the multi-dimensional poverty index, so reducing poverty is a major issue.

Furthermore, some larger economies in the region are undergoing rebalancing from excessive structural surpluses to stimulating more domestic demand-led growth.

Also, there is the question on how to absorb the growing workforce because there will be significant demographic changes that the region will face – both in terms of further growth in population as well as in terms of the rise in the aging population.

Video: Ms. Akhtar highlighting progress made by the Asia-Pacific region and the challenges before it.

UN News: In light of these challenges, as well as for the 2030 Agenda for Sustainable Development, what has ESCAP been doing to assist its members?

Shamshad Akhtar:  For the 2030 Agenda, ESCAP’s intergovernmental focus and work programme has been transformed to support the development of a cohesive, coherent and coordinated institutional framework, which is called the Asia-Pacific Forum on Sustainable Development.

We are updating our analysis of regional cooperation and integration to help strengthen the sustainable development agenda. This will in turn, help the region get connected in a much more sustainable manner

At the same time, the 2030 Agenda includes a number of transboundary goals so we hope to leverage regional cooperation and integration to fast-track implementation of these particular goals.

We are also supporting the means of implementation of the 2030 Agenda: We have a track for financing for development in Asia-Pacific where we are raising awareness on the significance of, as well as on the means of, boosting domestic resource mobilization, in particular the tax-to-GDP ratio as well as formulating tax policies that are supportive of the sustainable development agenda.

We also continue to work on infrastructure financing and capacity building, and also looking at climate change, financial inclusion, science, technology and innovation, and a range of other issues.

UN News: You mentioned the fact that the Asia-Pacific region is very diverse. How are you able to cover the entire region while operating out of Bangkok?

Shamshad Akhtar: The ESCAP region covers a lot of countries. It has 53 member countries and nine associate members. Given the diversity of the region, we have subregional offices across the region: one in Suva, Fiji, for the Pacific; in Incheon, Republic of Korea, for North and North-East Asia; in Delhi, India, for South and South-West Asia; and in Almaty, Kazakhstan for North and Central Asia.

UN News: The Commission will be holding its seventy-third session during the week of 14 May. What are the major issues on the agenda?

Shamshad Akhtar: The session will be revolving around issues concerning sustainable development as well as the regional cooperation and integration agenda.  We will also be discussing a thematic report on energy efficiency. Having expanded our work programme to include energy, this will help us promote sustainable energy for all, while enhancing energy connectivity in the region and diversifying energy sources to include renewable sources.

We will also be discussing the overall economic and social situation in the region in addition to our core mandate of sustainable development and how they mutually support each other. 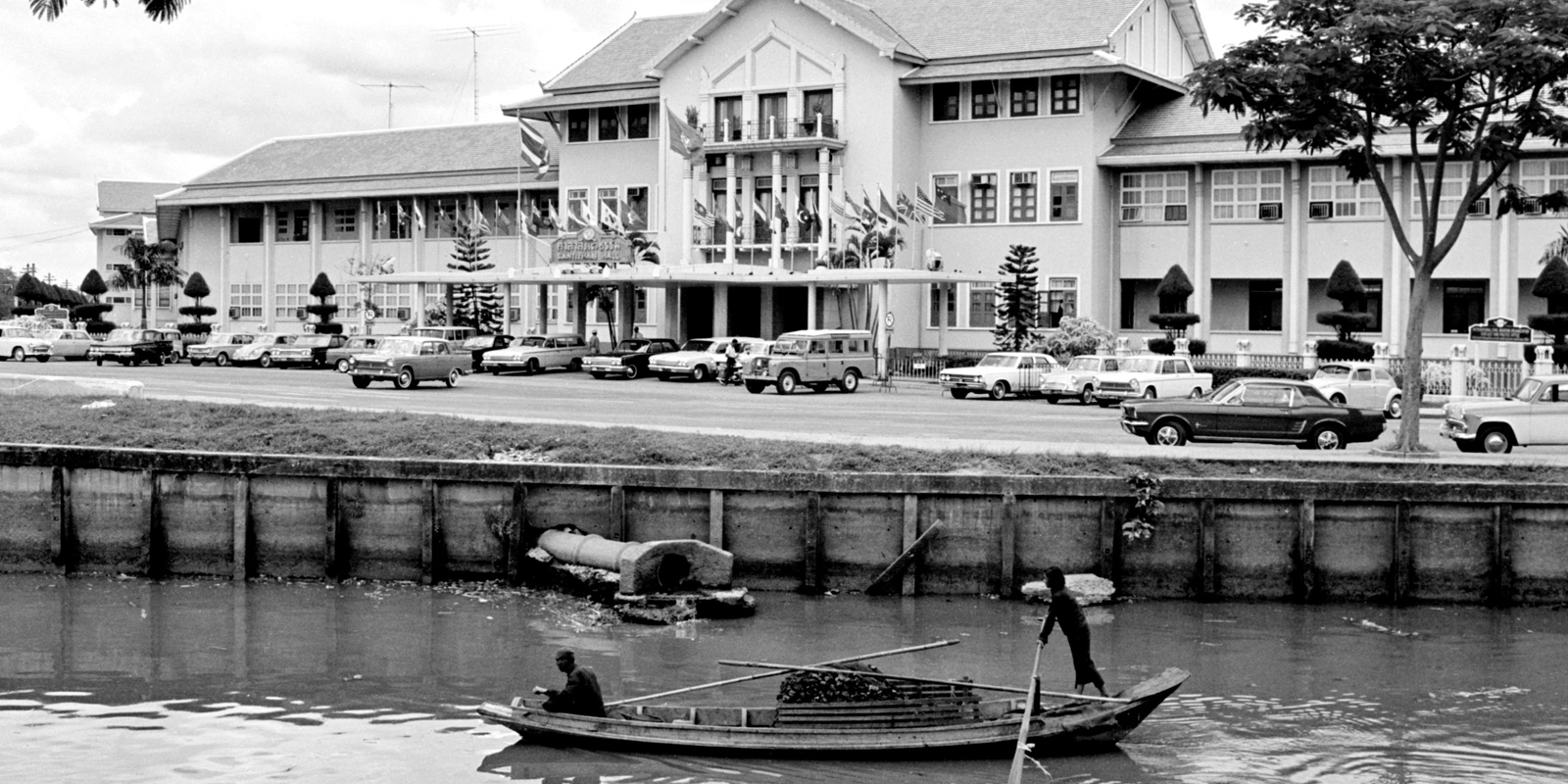 Sala Santithan, the complex that housed the headquarters of the then ECAFE, in Bangkok, Thailand, prior to the construction of its current offices. Photo: ESCAP archives 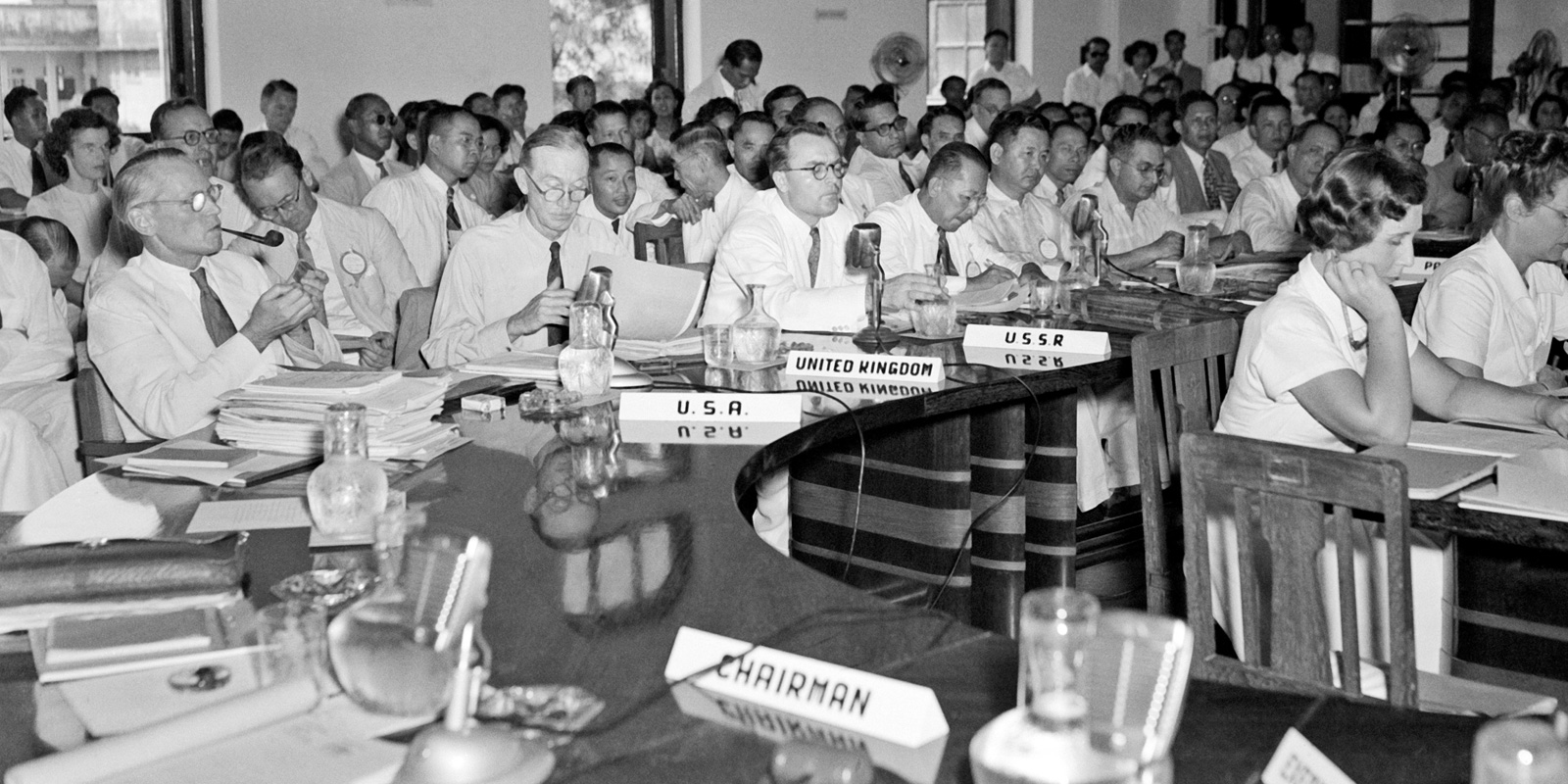 Representatives from the then ECAFE member States attend the sixth session of the Commission (1950). Photo: ESCAP archives 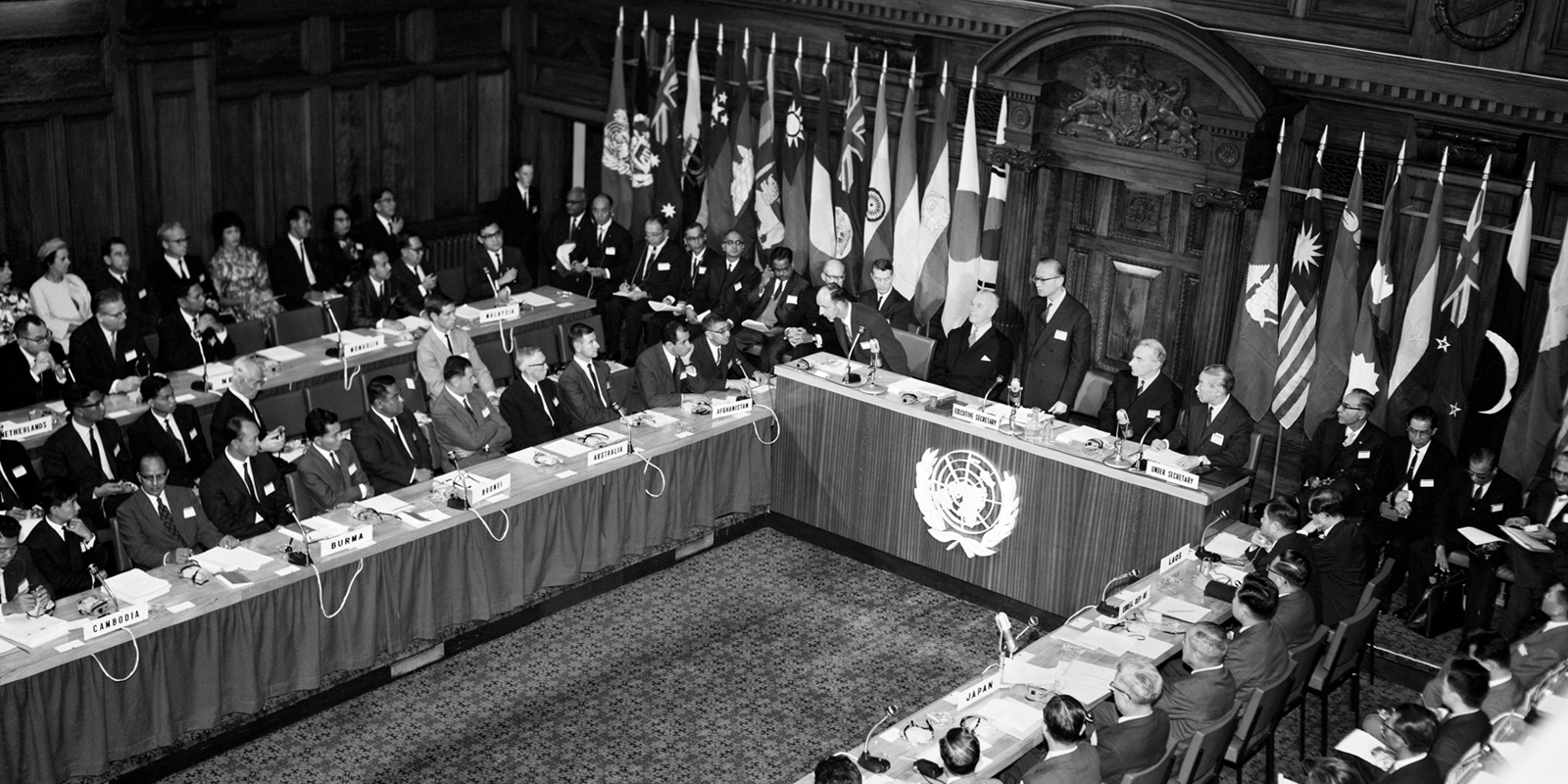 U Nyun, Executive Secretary of the then ECAFE, delivering an address at the twenty-first session, held in Wellington, New Zealand, in 1965. Photo: ESCAP archives 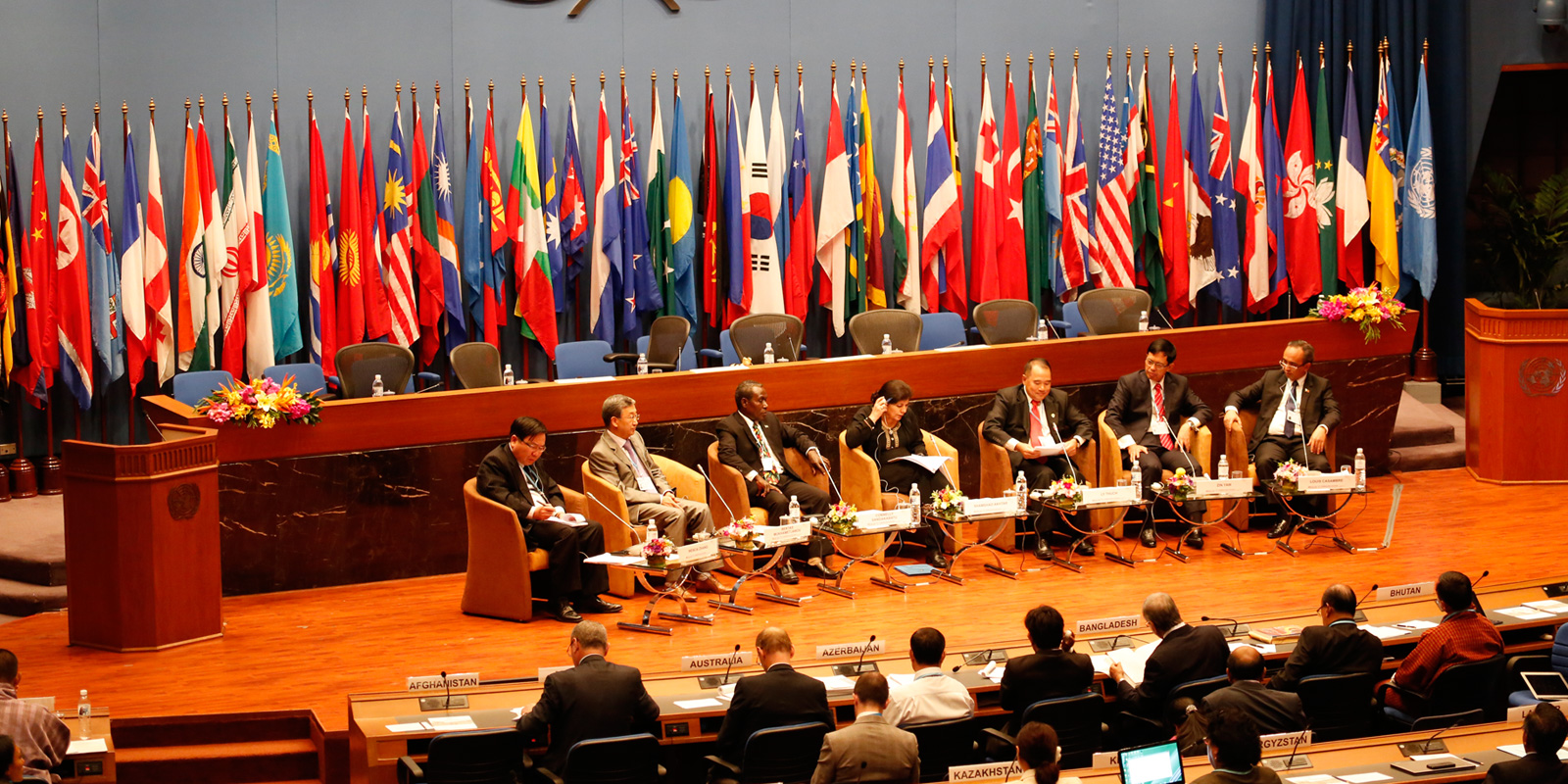 Delegates attend the seventy-second session of the Commission in May 2016. Photo: ESCAP 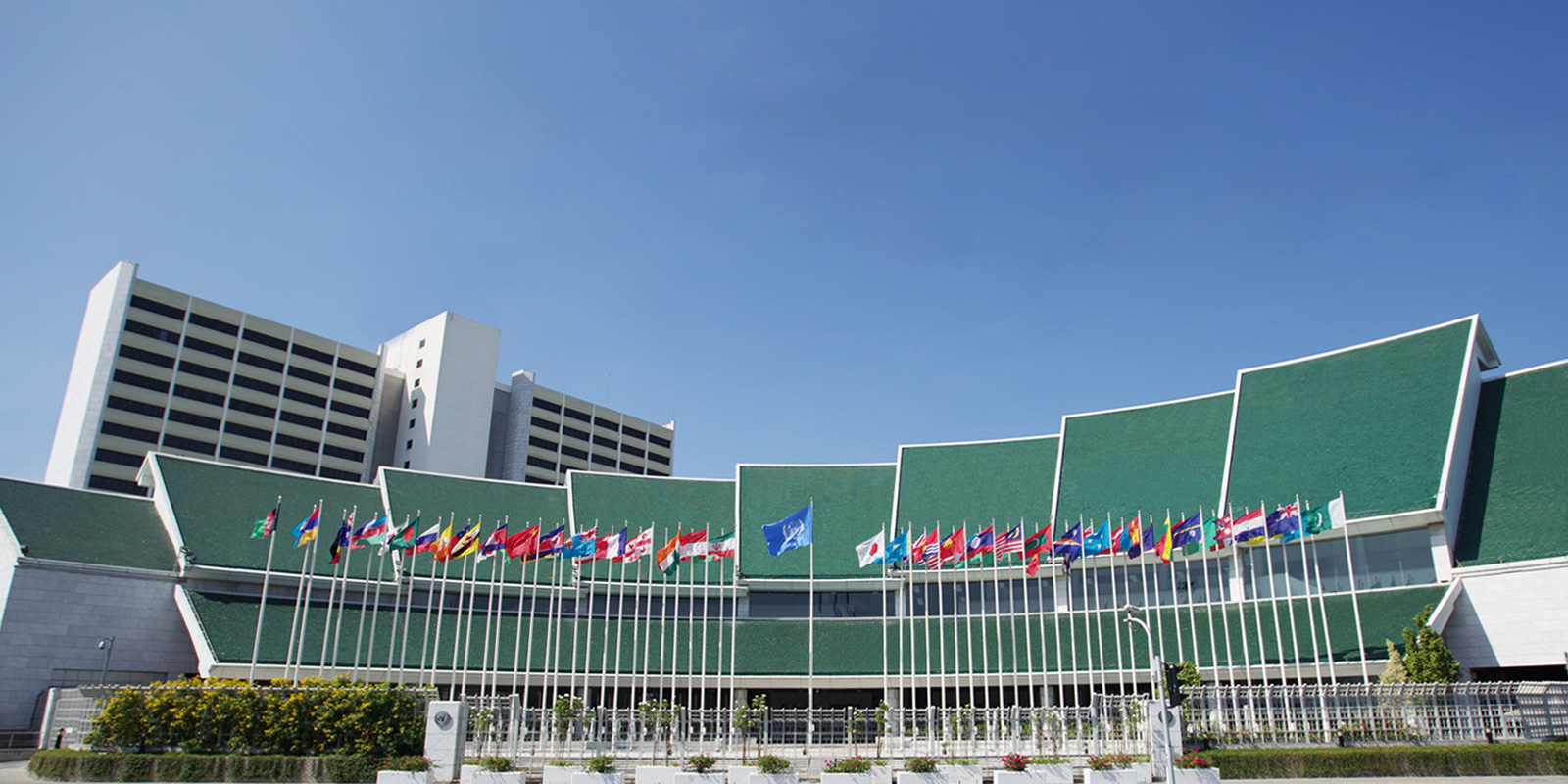 ESCAP headquarters in Bangkok, Thailand. The UN Conference Centre is in the foreground and the ESCAP secretariat building is in the back. Photo: ESCAP

UN News: What are the major outcomes expected this year?

Shamshad Akhtar: Deliberations at the Commission will provide us with greater understanding on what support the region and the countries need from ESCAP. The Commission will guide us on what we can do for the member States to further support them in the implementation of the 2030 Agenda and other mandates that have been assigned to us. But the ultimate test will be how we can match the demand with the supply.

UN News: Would you like to add anything else?

The regional commissions are a very important arm of the UN. However, because they are not based in New York, they often are not so visible

Shamshad Akhtar: One thing I would like to mention is that regional commissions are a very important arm of the United Nations. However, because they are not based in New York, they often are not so visible.

The technical work done at the subregional level or at the country level is actually being done by the regional commissions.

We play a very important role in connecting the global with the national through the bridge of the regional commissions. We are going to be supporting a lot of knowledge-sharing and all kinds of technical work at the regional level, not for the sake of doing it, but to ensure that these are all consolidated with the discussions at the global level. 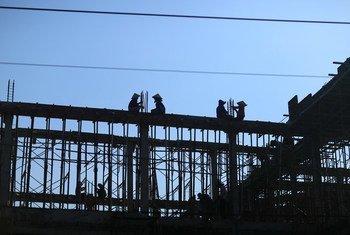