The opposition in Colombia has begun to lay down arms, a move welcomed today by the United Nations Security Council which recently visited the country to see the peace efforts first-hand.

In a statement to the press, the 15-member Council today welcomed “the peaceful arrival of almost 7,000 members of the FARC-EP [Revolutionary Armed Forces of Colombia-People’s Army] in the agreed zones and points.”

The Council welcomed also the “continued commitment of the parties to work together to enable FARC to lay down their individual weapons” by 29 May, which marks 180 days after the final peace agreement came into force.

Observers from the UN Mission in Colombia, are actively involved in the process of laying down arms by registering and identifying all the weapons present in FARC-EP camps within all 26 war zones, storing and then neutralizing and extracting the arms. The weapons include munition, mines and explosives.

The Council visited Colombia from 3 to 5 May, to witness first-hand implementation of the peace agreement between the Colombian Government and FARC-EP, and to observe the progress as well as the challenges to the agreement that ended the 50-year old conflict. 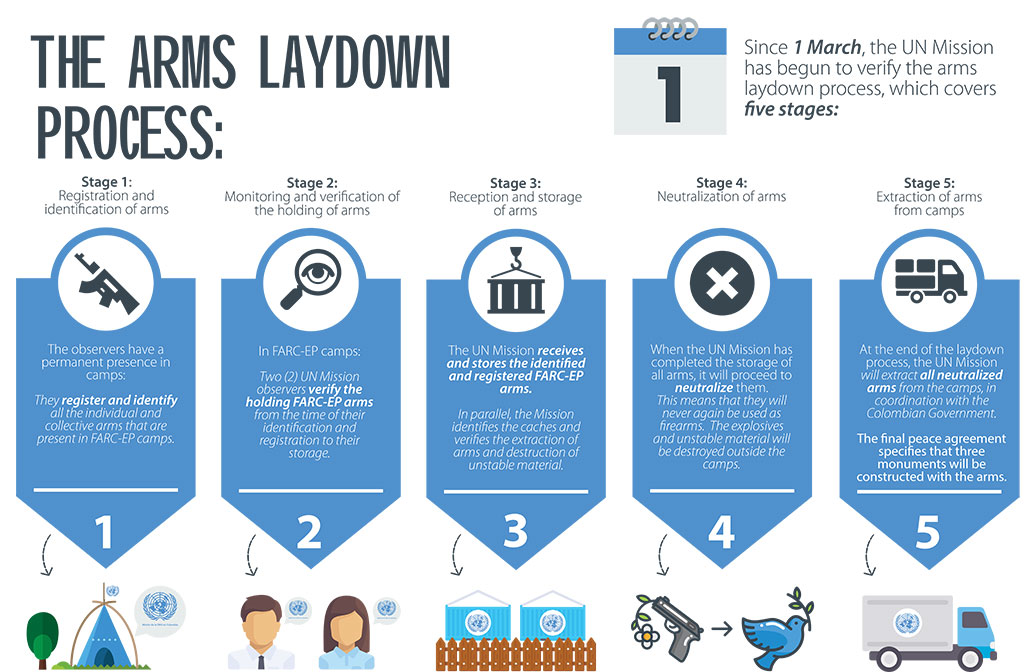 The visit included meetings with President Juan Manuel Santos and senior representatives from the Government, as well as leaders of the FARC-EP and members of various representatives in Congress.

The Council Members, led by Ambassador Elbio Rosselli of Uruguay – which holds the Council’s presidency during the month of May – also met with members of civil society and local communities.

In today’s press statement, the Council also paid tribute to the courage of Colombians who have embarked on “the path of peace.” They noted that violence is at its lowest level in over 40 years and underlined the significant benefits that a lasting peace could bring to the entire country.

Colombia’s peace process has the potential “to be a positive example to the rest of the world,” the Council said.

In early October 2016, Colombian voters narrowly rejected the historic peace accord between the FARC-EP. That deal was the culmination of four years of talks hosted in Havana, Cuba, between the parties, and which led to a cessation of hostilities and agreements on key issues such as political participation, land rights, illicit drugs and victims' rights and transitional justice. The two sides signed a new agreement in late November 2016.

While touring the Amazon region of Colombia where one of the monitoring mechanism facilities was set up under a historic peace agreement, a delegation from the United Nations Security Council met today with members of La Referma community, as well as Government representatives and FARC-EP members.