The United Nations human rights chief today announced that the Central Asian branch of his Office will extend its coverage to Uzbekistan now that an agreement is in place, highlighting that the country is “at a crossroads.”

“After my meeting with the President yesterday, we have a clear agreement that our Regional Office will from now on work closely with all five Central Asian Republics,” the UN High Commissioner for Human Rights, Zeid Ra'ad Al Hussein, told a press conference in Tashkent, the country’s capital.

“I am extremely happy that I myself, my Office and my staff are now set to play an active role in trying to secure a future where every citizen and resident of Uzbekistan has their human rights observed, and state-sponsored violations become a distant memory,” Mr. Zeid added.

He recalled that when the Regional Office was established in Kyrgyzstan’s capital, Bishkek, in 2008, Uzbekistan made it clear that the office covered four countries, not five.

The five priorities are: improving the public administration system; ensuring rule of law, and reform of the justice system; developing and liberalizing the economy; developing the social sector; and security, religious tolerance and inter-ethnic harmony, and constructive foreign policy.

“The successful implementation of those reforms could have a transformational impact on the country’s future,” Mr. Zeid said. “It is going to be a long and difficult road to get near that point, with obstructions and setbacks, but I do believe the journey has begun.”

He said he encouraged the Government to monitor actual human rights results as part of the High Level Government monitoring of the implementation of the Action Strategy.

“Needless to say, frameworks and plans are one thing, and results are another – especially when it comes to human rights, when States often make fine promises but fail to back them up with real change,” Mr. Zeid said.

He also said he has raised with the authorities the need to continue with the release of more political prisoners, and suggested the Government ratify the Optional Protocol to the Convention Against Torture, as it would greatly enhance and accelerate the effort to end torture, one of the issues that has been most damaging to Uzbekistan’s international reputation over the years.

He is also recommending – and the Government itself is proposing – closer cooperation with the other parts of the UN human rights system, including the treaty bodies and special procedures, welcoming an intention to invite the Special Rapporteur on the freedom of religion or belief to visit the country.

“Uzbekistan is, in my view, at a crossroads,” Mr. Zeid said. 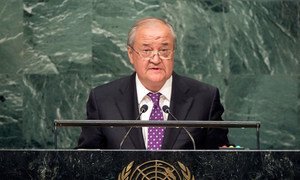 Recalling the progress made by Uzbekistan over the past 25 years, its Minister for Foreign Affairs said today that the country will remain firmly committed to the fundamental principles of the United Nations Charter, as well as the country’s national constitution.